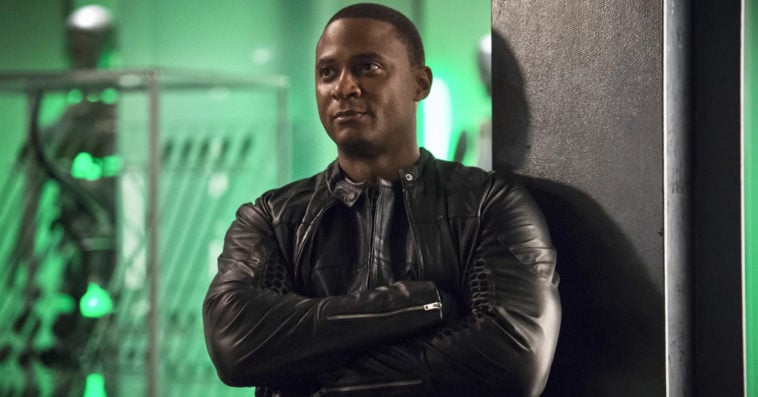 David Ramsey isn’t done with the Arrowverse yet.

Ramsey, who played John Diggle / Spartan in all eight seasons of Arrow, will guest star in a total of five Arrowverse episodes in 2021. He is reprising his role as Diggle in Superman & Lois season 1, Supergirl season 6, The Flash season 7, and Batwoman season 2. He’s also set to appear in a mystery role in Legends of Tomorrow season 6.

Rumors of Diggle being an Arrowverse version of Jon Stewart / Green Lantern have been running for years, so it won’t be a surprise if Ramsey pop up as a member of the Green Lantern Corps in the upcoming season of Legends of Tomorrow. After all, the Arrow series finale ended with a scene that saw Diggle opening a mysterious box from the heavens. While the object inside the box was not revealed, its familiar green glow suggests that it’s a power ring ― a piece of jewelry that gives Green Lantern Corps members their powers.

If Ramsey’s Legends of Tomorrow mystery character is a member of the Green Lantern Corps, then the Waverider crew will probably bump into him while searching the galaxy for their captain, Sara Lance (Caity Lotz), who was abducted by aliens at the end of the show’s season 5.

Aside from guest starring in five Arrowverse episodes, Ramsey will also direct five episodes in the DC TV universe, including installments of Superman & Lois and Supergirl.

“I remain in awe of the imprint these shows have had on television and I’ve been blessed for the better part of a decade to be a part of them both in front of and behind the camera,” said Ramsey in a statement, announcing his return to the franchise. “To say I’m excited beyond belief to return to the Berlantiverse would be an understatement. I can’t wait to continue telling these stories.”

Batwoman season 2 premieres on January 17th on The CW, while The Flash season 7 and Superman & Lois season 1 debut back-to-back on February 23rd. Supergirl season 6 and Legends of Tomorrow season 6 don’t have premiere dates yet.