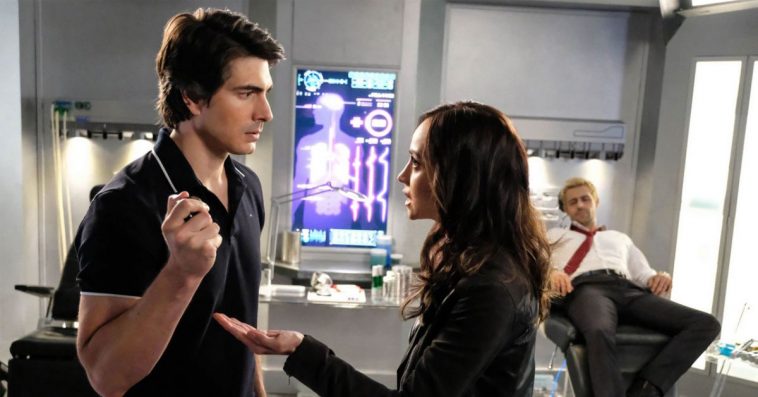 As announced last August, Brandon Routh and Courtney Ford were stepping down as series regular in Season 5 of Legends of Tomorrow. The real-life husband and wife wrapped filming last October, and based on a recent interview with their co-star Caity Lotz, Routh and Ford’s last day on set was kind of bittersweet.

“It was really sad! We didn’t want Brandon to leave,” Lotz, who plays Sara Lance in the series, told Comic Book Resources. “But there was lots of cake and, you know, celebrating the time together.”

“Brandon and Courtney are going on to do great things,” the actress added, before hinting that Routh may still return to the series in some capacity in the future. “On these shows, once you’re gone, you’re never actually fully gone.”

Routh, who originated his role as Ray Palmer, aka The Atom, in Arrow, has been a series regular in Legends of Tomorrow from the start. Ford, meanwhile, joined the time-travel show, as the recurring character Nora Darhk in Season 3, before getting promoted to a regular at the beginning of Season 4.

It’s unclear how the stories of both characters will come to an end. But since Ray and Nora are love interests, it’s likely that Ray will leave the Waverider crew to start a new life with Nora somewhere else.

According to Deadline, Routh and Ford’s exits stemmed from a creative decision to wrap up their character’s storyline.

“I’m so grateful to have had the opportunity to bring the big-hearted and humorous Ray Palmer to life for our fans over the last 5 years, but unfortunately, his storyline is pointed in another direction,” Routh said in a statement last August. “I’m saddened to see Ray’s journey end for now but wish my Legends family well.”

“Nora Darhk is very close to my heart. If it were my choice, I’d play her for years to come,” Ford added. “But I understand that stories run their course, and I’m grateful for the time I did have bringing Nora to life on Legends of Tomorrow.”

Legends of Tomorrow airs Tuesdays at 9 p.m. ET on The CW.