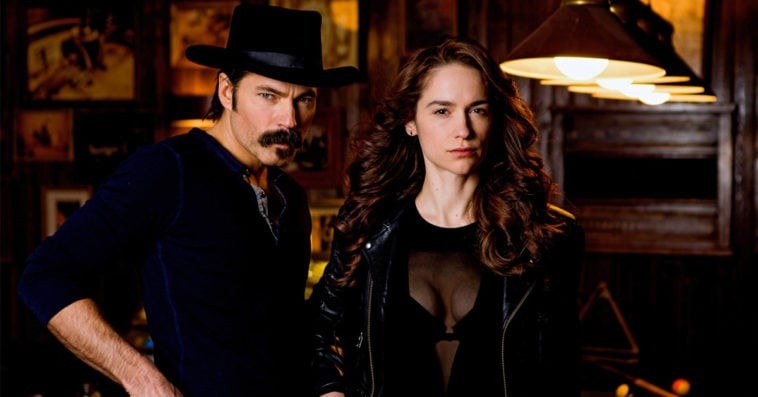 The Earpers have proven once again that they’re one of the most devoted TV fandoms ever after Wynonna Earp was hailed as the Favorite Sci-Fi/Fantasy Show of 2020 at the People’s Choice Awards last Sunday.

The Syfy Western horror series beat out seven other nominees for the prize, namely, The CW’s The Flash, Legacies, Legends of Tomorrow, Supergirl, and Supernatural, as well as Netflix’s Locke & Key, and The Umbrella Academy.

In a video, Wynonna Earp stars Tim Rozon and Melanie Scrofano accepted the award and thanked the show’s fans ― the Earpers ― for their undying support.

“For me, the best thing about the People’s Choice Awards is that the fans make it happen. We already know that we have the best fans in the world and it doesn’t take any more to prove it. But it doesn’t hurt [laughs]. It’s definitely awesome, I love it,” said Rozon, who plays Doc Holliday on the series. “I think when we win, the fandom wins and that’s who deserves most of the adulation.”

Scrofano, who portrays the show’s titular role, added that 2020 has been such a difficult year, so scoring a win at the People’s Choice Awards means so much for her and for the rest of the Wynonna Earp family. “It’s so nice that fans were able to give us all a little bit of light in a really tough year, so thank you,” said the actress.

Unbelievable. And yet, because it came down to the #Earpers, never in doubt. Thank you so much, you gorgeous people. It means the world to us. Especially this year.❤️ #PCAs https://t.co/wmNpTazpT0

This is the second time Wynonna Earp has won the same title at the People’s Choice Awards. In 2018, the series also got the crown as the People’s Favorite Sci-Fi / Fantasy Show.

Wynonna Earp’s recent win at the People Choice Awards wasn’t really surprising, as Earpers had previously proven their devotion to the series when its fourth season was unexpectedly delayed. During that production limbo, Earpers rallied behind the show on social media and even purchased several billboard spaces in Time Square to show their love and support for the series.

Production on the final six episodes for Wynonna Earp season 4 resumed in July after it was temporarily halted due to the COVID-19 pandemic earlier this year. The remaining episodes of the season are set to premiere on Syfy sometime in 2021.