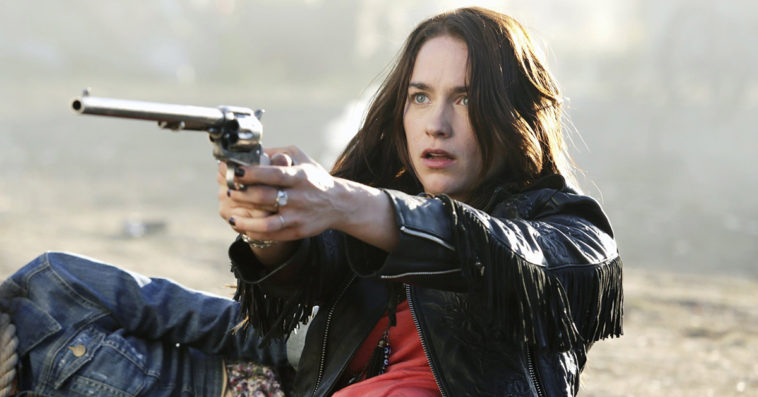 A number of Wynonna Earp fans, aka Earpers, assembled in the corner of West 42nd Street and 7th Avenue in New York’s Times Square on Tuesday evening to celebrate the return of their favorite series after its Season 4 production was previously put on hold.

But now that they had successfully saved the Melanie Scrofano-led series from the brink of cancellation through their popular #FightForWynonna campaign, the 30 or so fans happily cheered together as they watched congratulatory messages flash on electronic billboards in the corner of 42nd and 7th, which they temporarily called Earp Square for the occasion.

Earpers, thank you for all your support. Here’s to bringing #WynonnaEarp back to where it belongs… @SYFY! ??? pic.twitter.com/nd6T49xNOh

“This is now a celebration, now that we’ve got our show. We couldn’t not fight for it,” said Earper Jill Macklem who helped organize the victory party and the #FightForWynonna campaign that included buying spots on several electronic billboards in Times Square.

“It put a lot of eyes on it,” added Macklem of how she thinks the #FightForWynonna campaign put pressure on series producer IDW Entertainment to resolve its financial issues, which ultimately delayed the show’s Season 4 production.

In a phone interview with Syfy Wire, Wynonna Earp showrunner and executive producer Emily Andras said that she has always been extremely grateful with the Earpers’ immeasurable support and dedication for the show. “It feels amazing. We have an incredibly loyal fanbase. I want to thank them for all their efforts,” said Andras. “It’s nice to see the good guys win for once.”

Just last week, IDW Entertainment announced that Wynonna Earp is now set for a 2020 summer debut on Syfy. Plot details about the new season are being kept under wraps, but Andras confirmed that she and other representatives for the supernatural drama will be attending a panel at the San Diego Comic-Con next week.

#WayHaught may be our favorite ship, but Earpers + #SDCC is a close second. See you 7/20! pic.twitter.com/ovz9mSdbbb