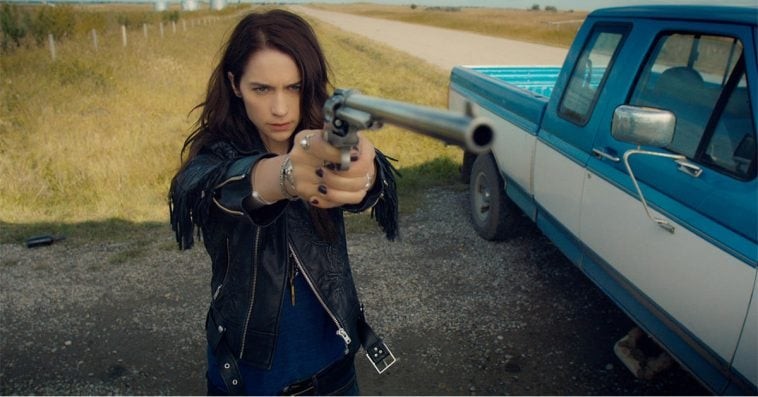 Wynonna Earp star Melanie Scrofano and series creator Emily Andras have nothing but gratitude for all the passionate Earpers that helped make Season 4 of the Syfy series possible.

During an interview with Entertainment Weekly at the New York Comic Con this past weekend, Scrofano and Andras were asked what it was like to see Wynonna Earp fans rally behind the show and push for Season 4.

“I don’t think it was terribly surprising. We already know how much support we have from them just by how positive they are online,” said Scrofano who plays the title role. “They’re always giving us the best of themselves. It was not a surprise because we know that they’re such great people, but it was also so reaffirming.”

“I was relieved. It was really moving,” Andras added. “The fact that they rallied, even before they knew what they were rallying for… it was incredible. It feels once in a lifetime to have a fanbase like this.”

Scrofano and Andras, along with series stars Dominique Provost-Chalkley and Katherine Barrell, also teased what fans can expect from the upcoming season. Andras said that even though the Earp family curse is now broken, “there’s still a lot to keep” the characters of the show “busy.”

When asked what she would like to explore more about Wynonna in the next season, Scrofano said that it’s “really interesting” for her to find out what her character’s identity is now that the curse is gone. “Finding her place in the world when she doesn’t have a place anymore I think is really interesting but hopefully still doing it with a sense of humor,” the actress said, before adding that it would also be exciting if the show brings back the daughter she abandoned.

Provost-Chalkley, meanwhile, doesn’t think that there would be a Wayhaught wedding in Season 4 despite the engagement between her character Waverly Earp and Barrell’s Officer Nicole Haught last season.

“Kat and I have talked about this before and it’s probably an unpopular answer but I like to think that we will have many more seasons ahead of us even though obviously with everything that we had lived through in this past year the stability of that can be a little bit worrying,” Provost-Chalkley said. “But I would definitely want to see a Wayhaught wedding before the end of Wynonna Earp. If we were lucky enough to get another season after this, then maybe that would come in Season 5.”

Provost-Chalkley continued: “Because we have dealt with the relationship in such a beautiful, realistic way, I think maybe it would be another year of developing their relationship before [a wedding]. But that said, it would be such a joy to play it, and I really do hope that our characters get to live that out before the end of our journey.”

Wynonna Earp Season 4 will premiere on Syfy in summer 2020.