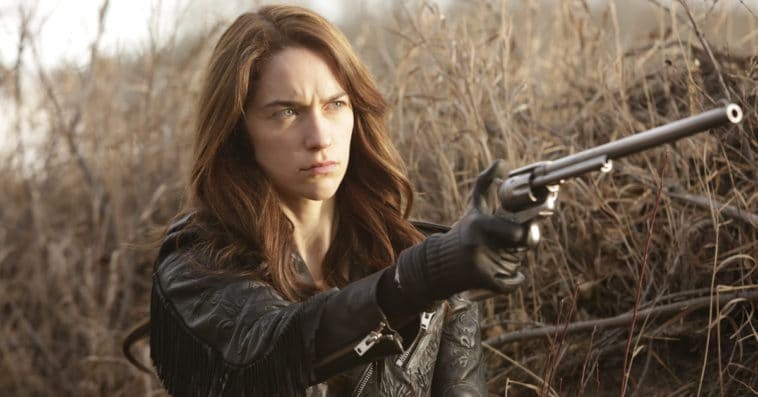 Wynonna Earp is officially returning to Syfy next month.

The network announced on Friday that the much-awaited season 4 of the supernatural drama will finally premiere on July 26th. But since the production on the 12-episode season 4 isn’t complete yet due to a filming break caused by the coronavirus pandemic, Syfy will only air the first six episodes of the season, which will culminate in a midseason finale on August 30th. While there’s no word yet on when the second half of the season will air, production on the final six episodes of the season is scheduled to resume later this summer in Calgary.

Syfy also dropped the show’s season 4 trailer on Friday, which opens with Wynonna Earp (Melanie Scrofano) doubting her ability to save everyone she loves. “My celestial sister, my vampire baby daddy, my Haught cop, without them, without the gun, I’m nothing,” says the titular character, referring to Waverly Earp (Dominique Provost-Chalkley), Doc Holliday (Tim Rozon), and Nicole Haught (Katherine Barrell), respectively.

At the end of season 3, Waverly was forced to remain in the Garden of Eden as its prisoner to have the portal closed, and Doc volunteered to stay with her to make amends for all the bad things he’d done earlier in the season. But as revealed in the trailer, Waverly and Doc will make it out of the garden at some point and will jump back to protecting their hometown of Purgatory from all sorts of supernatural threats in no time.

While it appears that Wynonna will be able to get the whole gang back together early in the new season, she still needs to work on her strained relationship with Haught, who gives her a punch in the face in the trailer. Also featured in the video teaser are former Black Badge Division lab technician Jeremy Chetri (Varun Saranga), real estate developer Mercedes Gardner (Dani Kind), and new character Rachel (Martina Ortiz Luis).