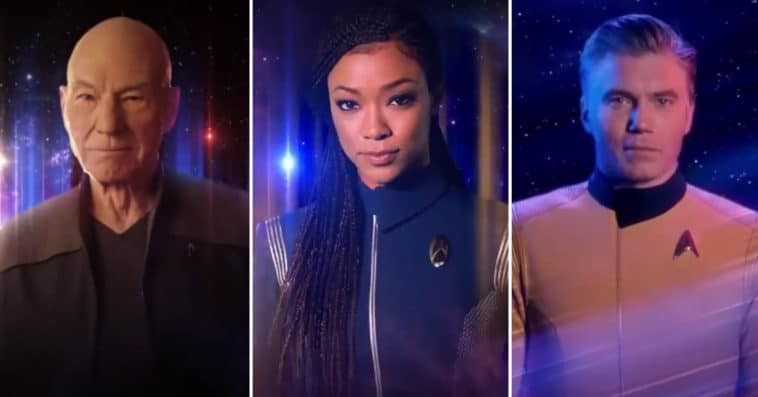 Aside from the much-talked-about Journey to the Peak ad campaign for Paramount Plus that culminated in a star-studded commercial during last Sunday’s Super Bowl, ViacomCBS also released a separate Star Trek Universe promo on the same night to hype up the upcoming launch of the new streaming service.

The 20-second ad features some of the main characters from the ongoing and upcoming Star Trek series. Those include Michael Burnham (Sonequa Martin-Green) and Saru (Doug Jones) of Star Trek: Discovery, Jean-Luc Picard (Patrick Stewart) and Seven of Nine (Jeri Ryan) of Star Trek: Picard, and Christopher Pike (Anson Mount) and Spock (Ethan Peck) of Star Trek: Strange New Worlds, which is yet to premiere.

As those Star Trek fan favorites appear one by one in the video, Stewart can be heard saying, “We are such stuff as dreams are made of. Openness, optimism, curiosity. That is life. That’s why we’re here.” The commercial then ends with a reminder that “every episode” and “every series” of the Star Trek: Universe will be available to stream on Paramount Plus starting on its March 4th launch date.

Fortunately for Trekkies, Star Trek TV franchise head Alex Kurtzman revealed last October that there will be no shortage of Star Trek content at least until 2027. “Heather Kaden and Aaron Baiers, who work with me at Secret Hideout — we literally just got off a call with the network mapping out with us through 2027,” Kurtzman said during an episode of a The Hollywood Reporter’s TV podcast. “Now when I say that, it’s not like it’s set in stone. It’s just, ‘Here’s a plan. Here’s what we’re looking at. Here’s how the different shows are going to drop.’”

If you don’t have a CBS All Access subscription yet, the streamer is offering a 50% off for new customers who sign up for the its All Access annual plans before March 4th.