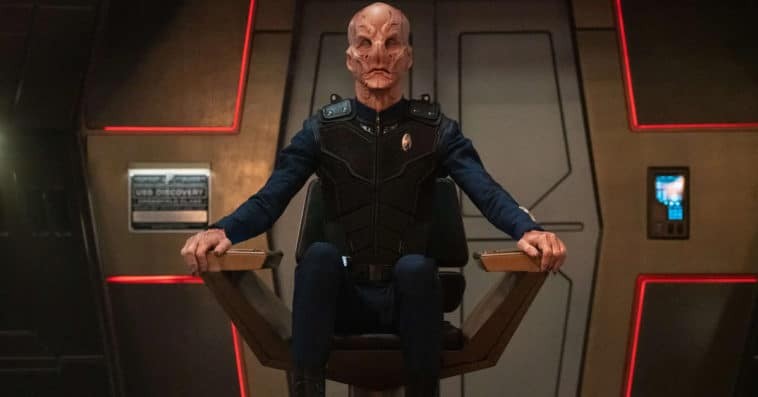 Saru (Doug Jones) will still be part of Star Trek: Discovery season 4 despite leaving the USS Discovery at the end of last season.

After Saru successfully convinced Su’Kal (Bill Irwin) to leave his home inside a holographic simulation in Star Trek: Discovery season 3 finale, Saru vacated his captain’s chair to bring Su’Kal back to their home planet of Kaminar.

In his latest Starfleet log, which was recently posted on the official Star Trek: Discovery Logs Instagram account, Saru said that relinquishing command of Discovery so he can accompany Su’Kal to Kaminar was a “difficult decision” but he believes that “it is the right one.”

Saru explained that as the repercussions of the Burn become clear, adjusting to life outside the nebula will not be easy for Su’Kal, so Saru vowed to “help him acclimate into Kaminar society, ensure he feels safe and cared for, however long that takes.”

While Saru doesn’t know when exactly he’ll be back aboard the Discovery, he is confident that he leaves the starship in excellent hands. “Michael [Burnham] (Sonequa Martin-Green) is more than a capable officer, she is a dear friend. I have no doubt she will exceed all expectations as Captain,” he said.

Being the first Kelpien to have voluntarily left Kaminar and the first of his species to enter Starfleet service, Saru admitted that he’s excited to return to his home world. He, however, is already thinking about when the time comes for him to return to duty.

“I cannot deny that I am quite eager to rediscover my home world… and I am also comforted knowing that when I am ready to return to the stars, Discovery will be there. Until then…,” Saru concluded his Starfleet log.

While it’s not clear how long it will take before Saru reunites with the rest of his Discovery crew, showrunner Michelle Paradise confirmed earlier this month that Saru will still be part of Star Trek: Discovery season 4.

“Doug Jones is not going anywhere,” Paradise told ComicBook.com. “Saru will be back, a hundred percent in [Star Trek: Discovery season 4]. So rest easy, sleep well. We’re not letting Doug go anywhere. We’re holding onto him.”

Production on Star Trek: Discovery season 4 officially began last November 2nd, and that week, Jones confirmed his involvement in the new season by sharing photos of him before and after having his head shaved. “No one makes me do this, it’s my own decision to save the extra step and time of bald capping before my Kelpien prosthetics are applied,” the actor tweeted alongside the pictures.

Back to my under-Saru look, as season 4 of @startrekcbs Discovery begins filming this week!
.
No one makes me do this, it’s my own decision to save the extra step and time of bald capping before my Kelpien prosthetics are applied. pic.twitter.com/x58cDyOJ7E

While plot details about Star Trek: Discovery season 4 are being kept under wraps, Jones thinks that fans will see Saru in the new season wrestling between his allegiance to Kaminar and his allegiance to the Starfleet.

“I think he’s been missing Kaminar and his people and his customs. So, he’ll lap that up for a while,” Jones told Sci-Finatics. “[But] he has captain rank with Starfleet. He worked very hard to get that. He made that his life’s mission. So I think we’re seeing a wrestle between this allegiance to home and his new allegiance to Starfleet for the second half of his life. He is not going to give up either one I don’t think. So I think in [Star Trek: Discovery season 4] we are going to see how he balances those things together.”

Star Trek: Discovery season 4 doesn’t have a release date yet but filming on the new season of the CBS All Access series is set to end on June 10th.