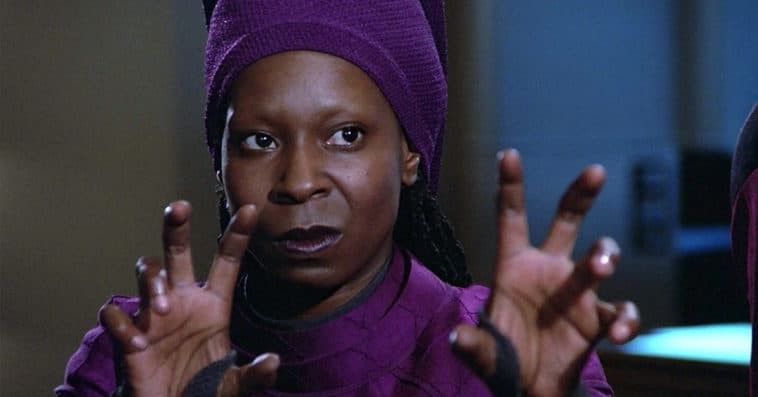 Filming for Star Trek: Picard season 2 is slated to begin next month, and Whoopi Goldberg can’t wait to join the cast of the CBS All Access series on set.

In an interview with SFX Magazine to promote her ongoing CBS All Access miniseries The Stand, Goldberg briefly discussed how Star Trek was her entry into genre fiction and looked back how thrilled she was when she landed the role of Guinan in Star Trek: The Next Generation.

When asked if she’s watching Star Trek: Discovery, Goldberg brought up Star Trek: Picard and shared how excited she is to be joining the Patrick Stewart-led series for its sophomore run.

“No, I haven’t seen [Discovery] – but I did watch the first season of Picard, which was great,” revealed the actress in the interview conducted in 2020. “From time to time, I talk to Patrick about Star Trek. Hopefully, I will be joining their cast for a little while next year. I’m very excited about that.”

During an appearance on The View last January, Stewart surprised Goldberg with a “formal invitation” to join the cast of Star Trek: Picard for its season 2. “I’m here with a formal invitation, and it’s for you, Whoopi,” the actor said. “Alex Kurtzman, who is the senior executive producer of Star Trek: Picard, and all his colleagues, of which I am one, want to invite you into the second season.”

Stewart’s offer elicited applause and cheers from the studio audience as Goldberg giggled in disbelief. Still shocked by what she heard, Goldberg stood up from her seat and gave Stewart a big hug. And when the actor begged her to “please say yes,” Goldberg did so with a smile.

As Trekkies know, Goldberg played Guinan, an El-Aurian bar hostess aboard the USS Enterprise, across 28 episodes of Star Trek: The Next Generation between 1988 and 1993. Alongside Stewart’s Picard, Goldberg’s character also appeared in the movies Star Trek: Generations and Star Trek: Nemesis.

“I’ve gone back to rewatch some of the more key Guinan episodes from Next Gen, the major Picard and Guinan moments. She’s such an amazing actor,” Chabon said of Goldberg. “I can’t wait.”

While it’s unclear what stories will be explored with Guinan’s return, a plot related to the character’s race seems likely. As mentioned above, Guinan is an El-Aurian, a long-lived race of psychically-endowed “listeners” whose homeworld was destroyed by the Borg. Seven of Nine (Jeri Ryan), who is a former Borg, is returning in season 2.

Star Trek: Picard season 2 may also dive deep into Guinan’s adversarial history with Q, the near-omnipotent entity played by John de Lancie, who recently hinted that he might be returning to his old Star Trek role.

As revealed by Ryan on Twitter last December, the start of production on Star Trek: Picard season 2 was pushed to February 1st.

The 10-episode sophomore run of the series doesn’t have a release date yet.