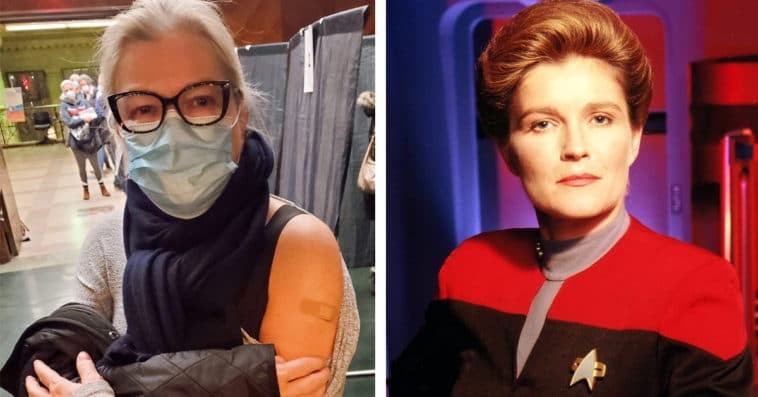 Kate Mulgrew is one of the latest celebrities to get vaccinated against COVID-19.

The 65-year-old actress, who is reprising her role as Captain Kathryn Janeway in Nickelodeon’s upcoming animated series Star Trek: Prodigy, revealed on Twitter that she received her COVID-19 vaccine in the wee hours of Monday morning.

Mulgrew also encouraged her followers to follow suit by providing information on how they can get their vaccines. “Consider this an order from your Captain – continue to mask up & register to receive your vaccine ASAP,” the actress wrote in a tweet, along with a photo of her shortly after getting vaccinated. “Here in the US, check the website for your individual state of residence (NY for me!) for when you can sign up.”

She continued: “We will beat this, but only if we all work together. Stay safe, my friends, and trust in science!”

Mulgrew isn’t the only Star Trek star who has already got vaccinated against COVID-19. Last week, Patrick Stewart ― who first appeared as Jean-Luc Picard in Star Trek: The Next Generation and is currently reprising the role in the CBS All Access series Star Trek: Picard ― took to Twitter to share a video of himself getting his COVID-19 vaccine after waiting for hours in line.

In the caption, the 80-year-old actor expressed his appreciation for health care workers and scientists for their sacrifice and service.

How do we say thank you to the health workers and scientists for their sacrifice and service? Receive the vaccine as soon as one can to lessen their load and keep wearing a mask to protect fellow citizens. In my 80th year, I am grateful and hopeful for better days ahead. pic.twitter.com/emGDlnYL2E

The news that Mulgrew already received her COVID-19 vaccine comes a few days after she confirmed that she’d be back for the second season of Star Trek: Prodigy. The yet-to-be-released series follows a group of lawless teens who discover a derelict Starfleet ship and use it to search for adventure, meaning and salvation.

During a Star Trek: Voyager virtual panel with Galaxy Con last weekend, Mulgrew gave a fan an update on Star Trek: Prodigy. Janeway told the fan: “I think you will enjoy it. I certainly enjoyed doing it, and I think we’re going into the next season very soon.”

Hahahaha **Spoiler Alert**. She just dropped that bomb and didn’t even know it! I honestly can’t wait!!!! pic.twitter.com/kCAgjemxO3

Though fans already knew that Nickelodeon had ordered two seasons of Star Trek: Prodigy, this update from Mulgrew revealed that she’ll be back to voice Captain Janeway in the show’s sophomore run.

Star Trek: Prodigy doesn’t have an exact release date yet but it is slated to premiere sometime this year.