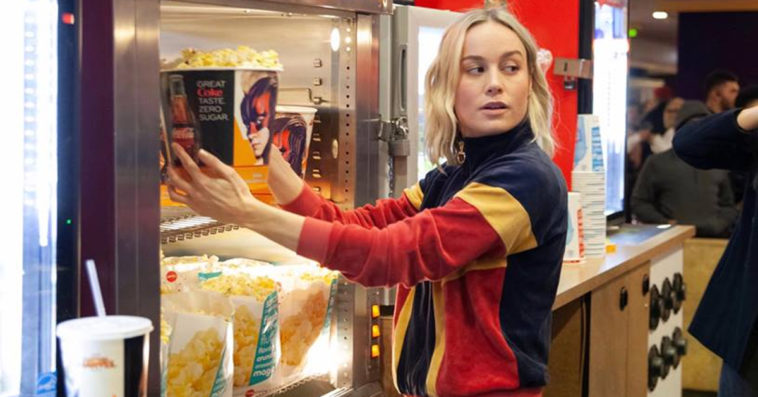 Brie Larson made Captain Marvel’s opening weekend more special for a few fans when she made a surprise visit at a screening of her new movie last Saturday night at the AMC Theater in Clifton Commons Shopping Center in New Jersey.

Dressed in a custom Juicy Couture Captain Marvel jumpsuit mirroring her costume on the film, Larson sipped on a cup with her face on it as she went inside a cinema to surprise the moviegoers. “I just heard that I was on the cups and popcorn and I wanted to see for myself,” the 29-year-old Oscar winner told the theater audience in a video. “Thank you so much for coming. You guys are so awesome to come [on] opening weekend.”

#CaptainMarvel herself, @BrieLarson, popped into theaters on Saturday night to surprise fans on opening weekend! #HigherFurtherFaster

In addition to making a surprise appearance at a Captain Marvel screening, Larson also hopped behind the concessions counter to hand out soda and popcorn to fans while also posing for photos with them.

Since Larson doesn’t really need to do any of these given the big marketing push that Marvel has given the film, fans appreciate the actress’ effort for going the extra mile.

last night me and my friends went to go see Captain Marvel and right when we were about to leave the theaters, we saw Brie Larson!! She was so nice and it was amazing seeing her in Clifton commons. Brie has the most purest heart as well and is the nicest person you will ever meet pic.twitter.com/WVShDHNDCO

Honestly the fact that Brie Larson went to the theaters just to surprise fans on opening weekend speaks volume. She didn’t have to do this at all but she did. Also her smile with the girls. Again this is why rep is extremely important. Nothing but respect for my Captain Marvel ? pic.twitter.com/2EO6e9a6Nf

Captain Marvel, which introduces Larson’s titular heroine to the Marvel Cinematic Universe (MCU), had a huge opening weekend, earning $153.4 million in ticket sales at 4,310 theaters in the U.S. and Canada from Friday through Sunday.  The film also performed well overseas, grossing $303.2 million during its first weekend.

The movie, which also stars Samuel L. Jackson (Nick Fury), Ben Mendelsohn (Talos), Djimon Hounsou (Korath), and Jude Law (Yon-Rogg), was the first film of 2019 to open to more than $100 million. It also marks the seventh-biggest opening for MCU and the second-biggest theatrical debut of a new Marvel hero behind only last year’s record-breaking Black Panther.