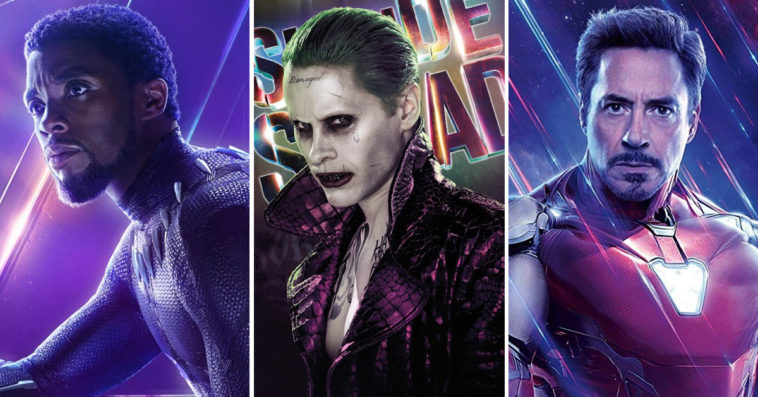 Have you ever wondered how rich superheroes and supervillains are? Well, wonder no more, as Curry’s blog, TechTalk, did some of the calculations for us. With expert insights from Vincent Zurzolo, COO of Metropolis Collectibles — the world’s largest dealership of vintage comics — TechTalk got the estimated net worth of six high-profile characters from Marvel and DC by assessing their apparent, individual assets. 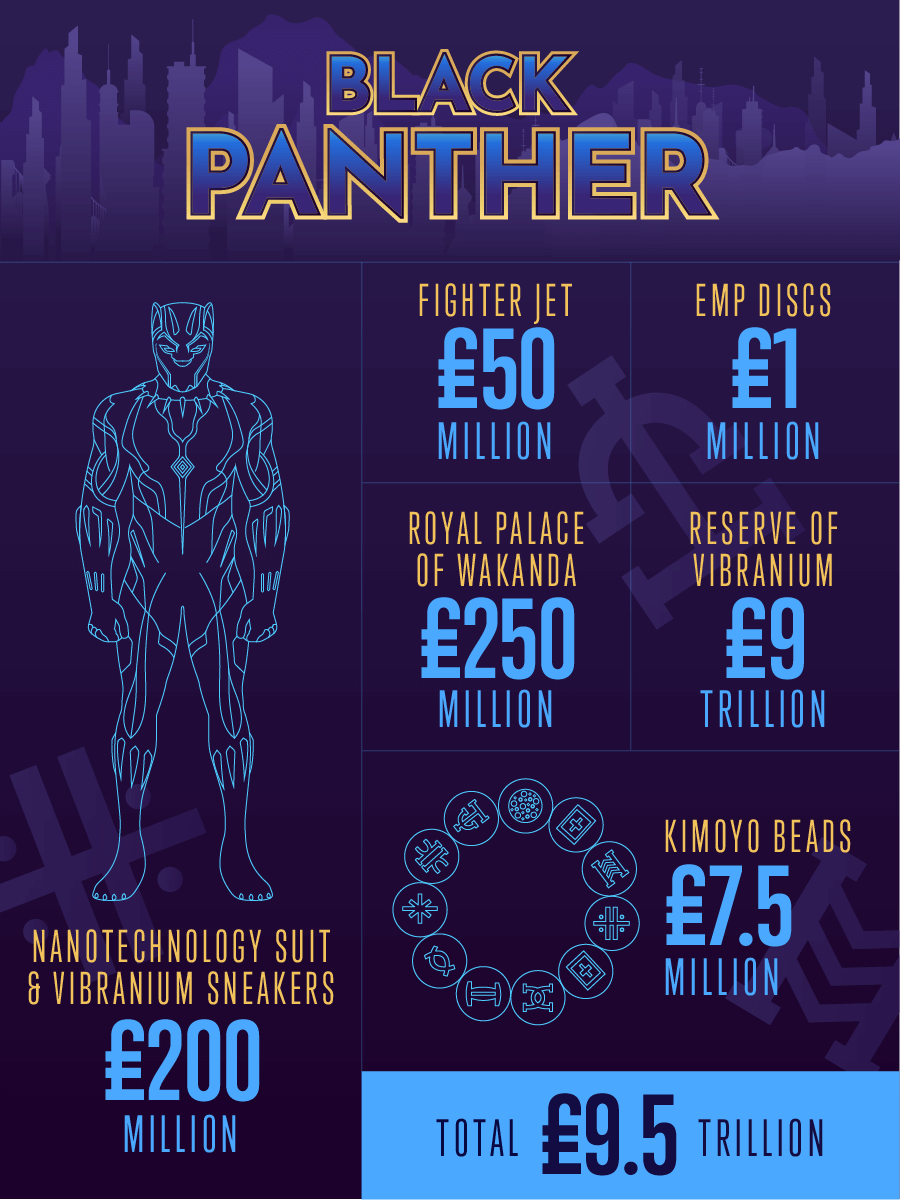 Black Panther, aka T’Challa, is arguably the richest among all the characters in the Marvel Cinematic Universe. As the King of Wakanda, T’Challa is the rightful owner of the country’s rich reserves of vibranium, which is calculated to be worth £9 trillion ($11.4 trillion). He also lives in a £250 million ($316 million) royal palace and owns a £50 million ($63 million) private fighter jet.

T’Challa’s superhero outfit is also worth a fortune. His nanotechnology suit and vibranium sneakers are priced at £200 million ($253 million). When the values of all these assets are added to his £7.5 million ($9.5 million) Kimoyo Beads and £1 million ($1.2 million) EMP discs, T’Challa’s net worth totals to £9.5 trillion ($12 trillion). 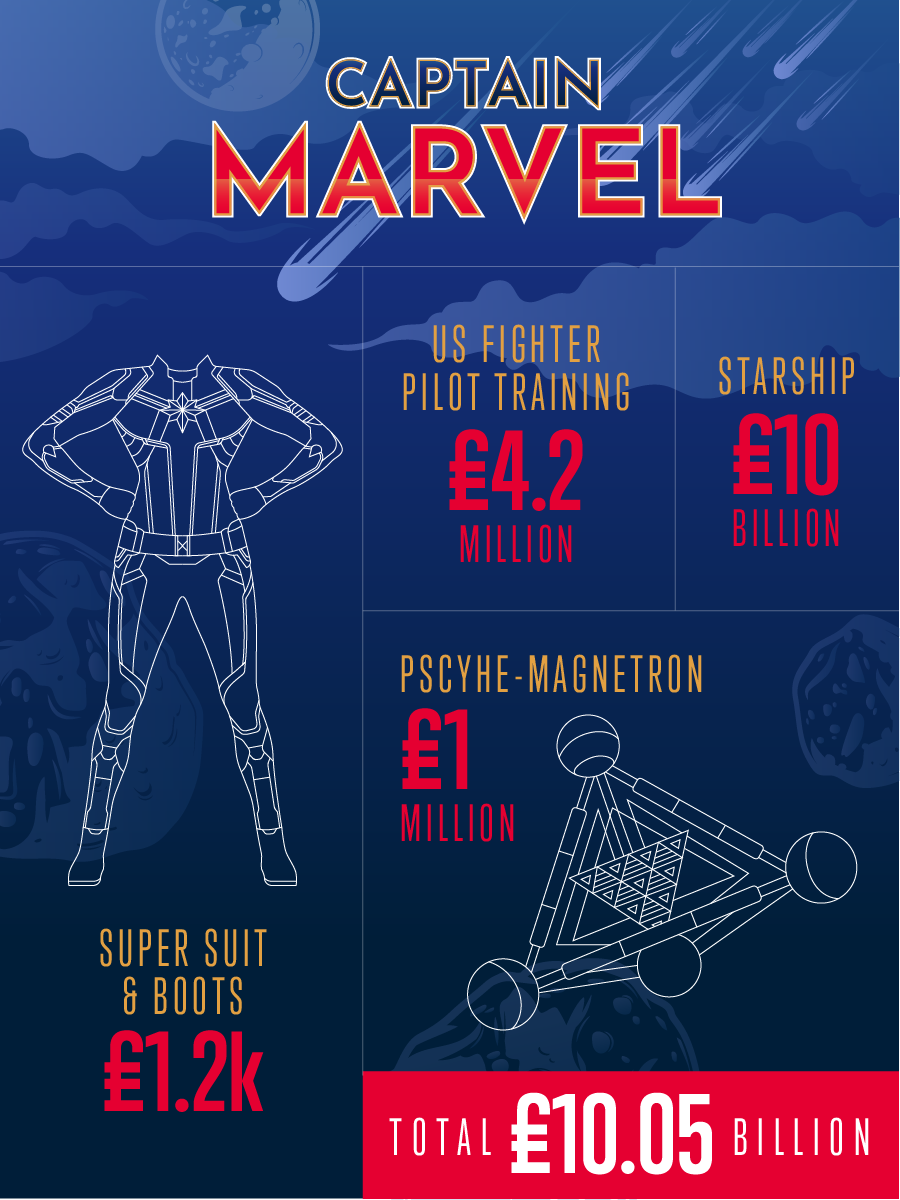 Though Captain Marvel, aka Carol Danvers, is not as rich as T’Challa, the Marvel superheroine is still a member of the billionaires club. Carol has an estimated £10.5 billion ($13 billion) net worth. £10 billion ($12.6 billion) of that amount is the value of the starship she’s commandeering, while £4.2 million ($5.3 million) of that is the money she will have been invested into her training as a U.S. fighter pilot.

Carol’s other expensive assets include her £1200 ($1500) superhero suit and boots, and her £1 million ($1.2 million) Psyche-Magnetron — the weapon that exploded near her and left her with a new set of superhuman abilities. 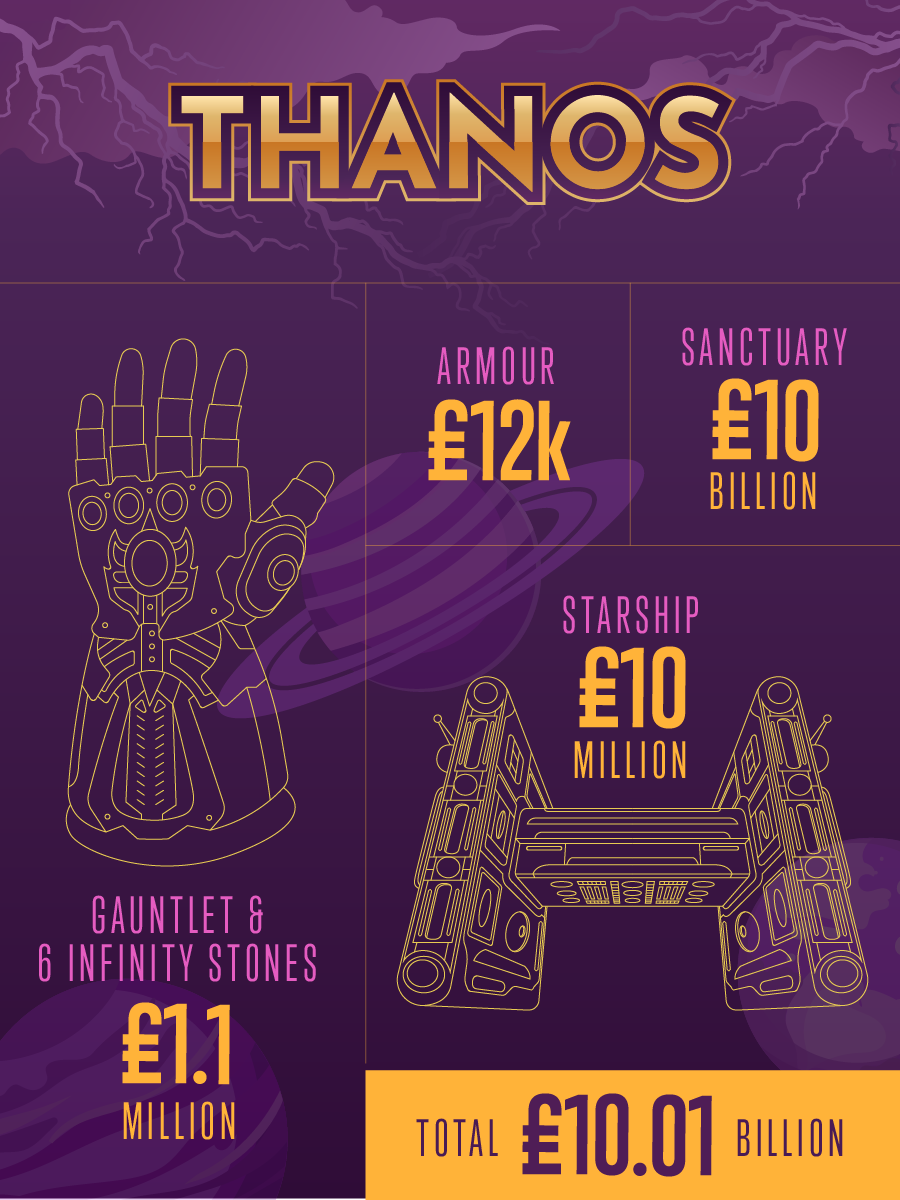 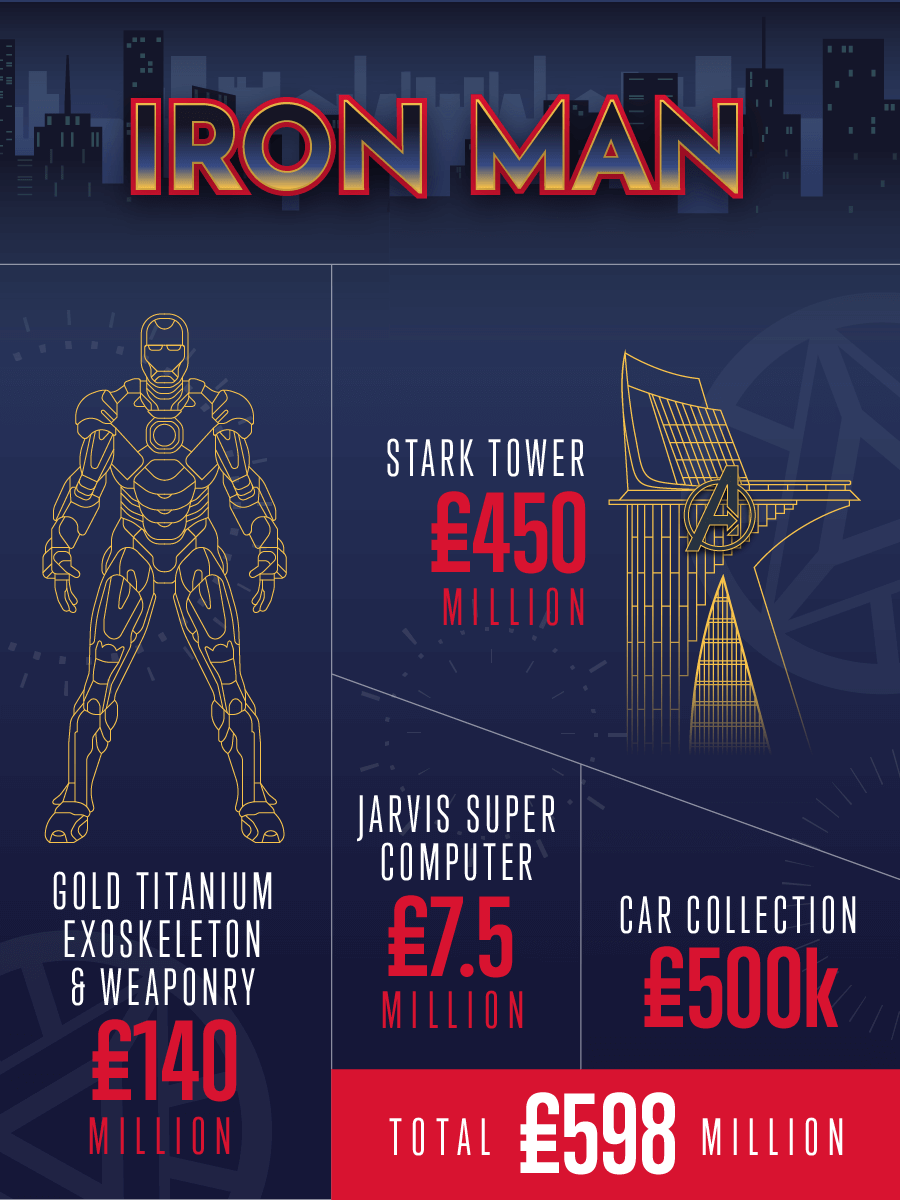 Though usually described as a billionaire, Iron Man, aka Tony Stark, only has a net worth of £598 million ($758 million), according to TechTalk’s estimate. £450 million ($570 million) of that figure is the value of the Stark Tower, while £500000 ($634000) of it is the total value of his luxury vehicles. Also included in his priciest assets are his £7.5 million ($9.5 million) JARVIS super computer and his £140 million ($177 million) gold titanium exoskeleton and weaponry.

“While it would seem T’Challa’s wealth as the ruler of Wakanda might be endless, I believe Tony Stark truly epitomizes the true capitalist spirit and in many ways he may be more aggressive with his intentions as a businessman rather than a monarch of a country,” Zurzolo commented. 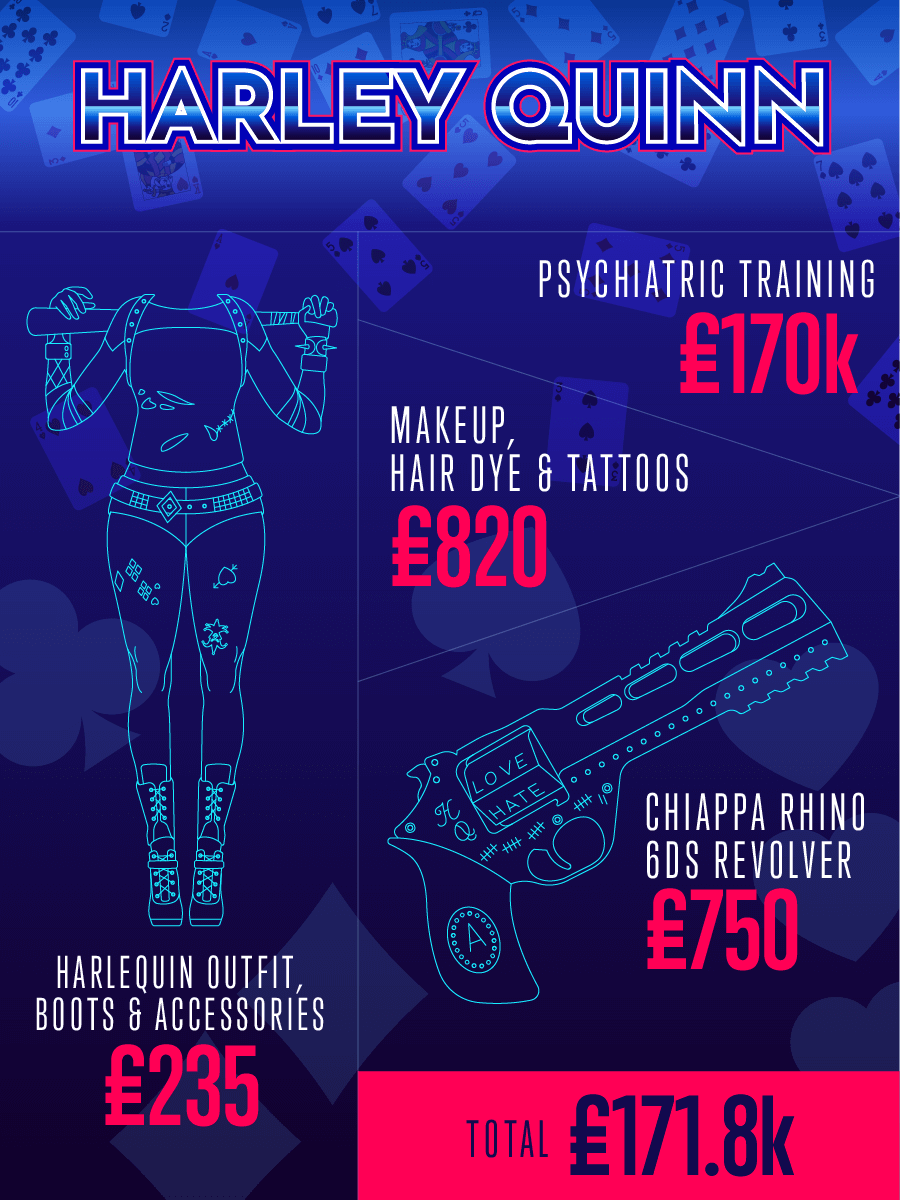 Harley Quinn probably has the craziest fashion taste among all the villainess in the DC universe. Her heavy caricature-esque makeup, brightly dyed hair, fancy tattoos, and signature outfit truly maker her stand out. Good thing Harley has some money to maintain that look. Her makeup, hair dye, and tattoos cost £820 ($1000), while her outfit, boots and other accessories have a total value of £235 ($297). 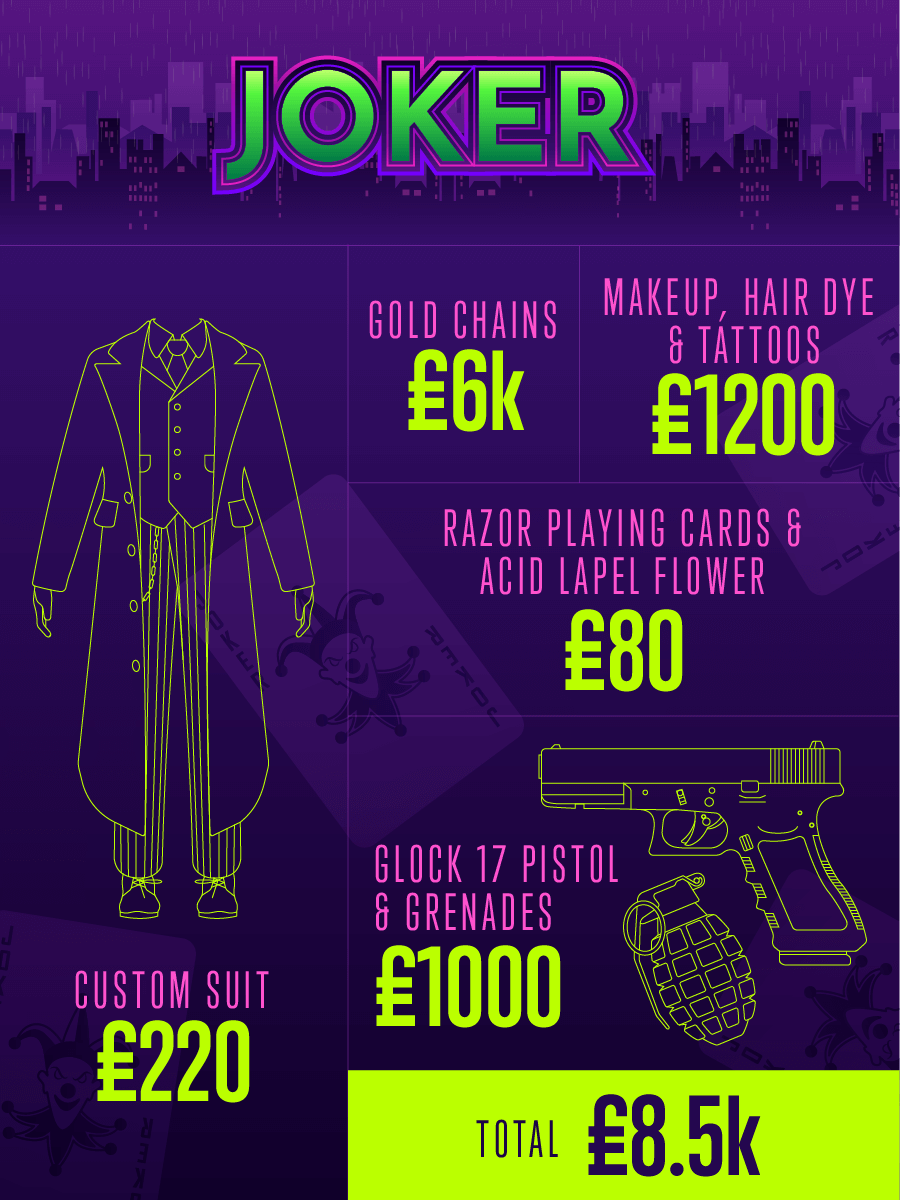