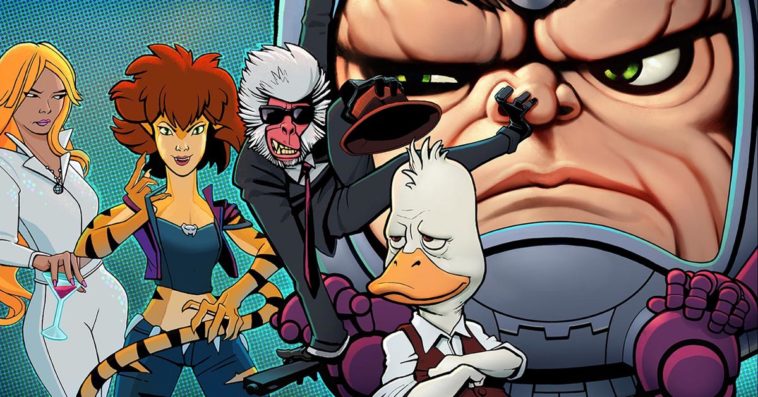 The ill-tempered yet beloved anthropomorphic Marvel character Howard the Duck is getting his own show on Hulu.

The new project is part of the four adult-oriented animated series that Marvel Television is producing for the streaming service. As announced during Hulu’s panel at the Television Critics Association winter press tour on Monday, the three other series in the lineup will center on lesser-known but equally interesting Marvel characters M.O.D.O.K, Hit-Monkey, and Tigra & Dazzler. The four series will then culminate in a team-up special called Marvel’s The Offenders, an apparent tongue-in-cheek nod to the now-defunct Netflix Marvel universe.

“A giant head. A monkey. A tiger lady and a disco queen. And the duck. Brought together because no one else could but Marvel Television on Hulu,” said Marvel Television head Jeph Loeb. “M.O.D.O.K., Hit Monkey, Tigra & Dazzler and Howard the Duck will form a team no one asked for — The Offenders (and wait until you see who the Team Leader is!)!  We have such tremendous talent bringing amazing adult animation that’s fun, fresh and fantastic.  We’re so excited for what’s to come!”

Written and produced by Kevin Smith and Dave Willis, Marvel’s Howard The Duck focuses on the titular talking duck who is hoping to return home with the help of his gal pal Beverly before the evil Dr. Bong can cook him. Created by writer Steve Gerber and artist Val Mayerik in 1973, Howard the Duck was recently voiced by Seth Green in the films Guardians of the Galaxy and Guardians of the Galaxy Vol. 2.

Marvel’s M.O.D.O.K., meanwhile, centers on the egomaniacal supervillain with a really big head and a really little body. M.O.D.O.K, which stands for Mechanized Organism Designed Only for Killing, struggles to balance his time maintaining control of his evil organization and keeping up with his demanding family. This project hails from writers Jordan Blum and Patton Oswalt.

Set in the Tokyo Underworld, Marvel’s Hit-Monkey is described as a darkly cinematic and brutally funny revenge saga that will tell the story of a wronged Japanese snow monkey, mentored by the ghost of an American assassin. The project is written by Josh Gordon and Will Speck.

Hulu has yet to announce a release date for each of these new shows.