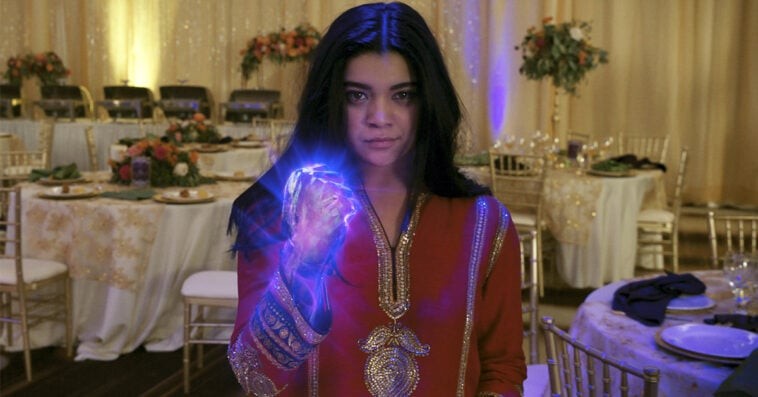 The first official Ms. Marvel trailer is finally here! Though only two minutes long, the promo video gives a great overview of what fans can expect from the upcoming Disney+ series that will bring Marvel’s first Muslim superhero into its cinematic universe.

The trailer opens with 16-year-old Kamala Khan (Iman Vellani) daydreaming about her superhero idol Captain Marvel (Brie Larson) while in class. The video then cuts to Kamala being scolded by a teacher for her behavior.

Kamala then opens up to her best friend, Bruno Carrelli (Matt Lintz), about how her obsession with superheroes affects her daily life. “Maybe they’re right. I spend too much time in fantasy land,” Kamala reflectingly tells Bruno.

But before Kamala can even distance herself from the fantasy world she has created, the trailer shows her transforming into a superhero similar to Captain Marvel after putting on a magical bracelet. Though her family noticed that something has changed about her since that moment, Kamala only shares her secret with Bruno.

“What does it feel like?” Bruno asks Kamala about her newfound superpowers.

Watch the Ms. Marvel trailer below:

Other cast members include Yasmeen Fletcher as Nakia, Laurel Marsden as Zoe Zimmer, and Aramis Knight as Kareem, aka the vigilante called Red Dagger. Anjali Bhimani is also part of the cast, but her role is being kept under wraps.

The 6-episode miniseries will premiere on Disney+ on June 8th. Created by Bisha K. Ali, Ms. Marvel is part of Phase Four of the Marvel Cinematic Universe and will serve as set-up for the 2023 film The Marvels, in which Vellani will reprise her role as Kamala along with additional cast members from the series.