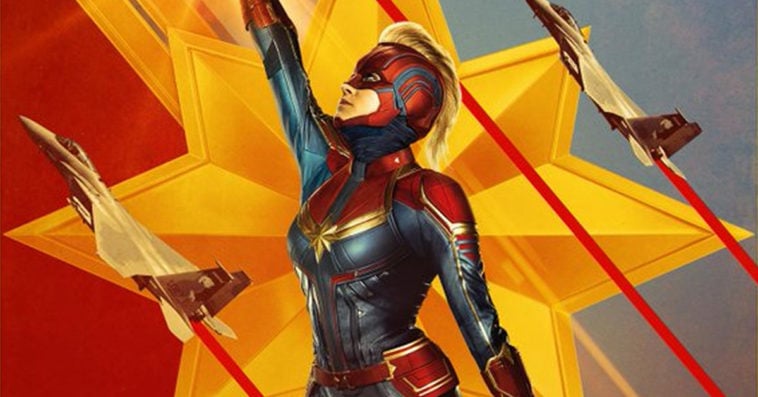 Check out our exclusive artwork from @MarvelStudios' #CaptainMarvel and discover her power in Dolby Cinema! Get tix now: https://t.co/2xwS1QOBjl pic.twitter.com/oZlZUgfzFg

Are you ready for @MarvelStudios #CaptainMarvel in IMAX? Check out our exclusive artwork and get ready to immerse yourself in the MCU with up to 26% more picture, only in IMAX theatres. Tickets now on sale: https://t.co/HgEUbpN1Eb. @CaptainMarvel pic.twitter.com/jrGFClW6Ln

Everything begins with a hero. Our exclusive art for @MarvelStudios' #CaptainMarvel is here!

In addition to the posters, Marvel Studios recently dropped a new trailer for the movie during Monday’s College Football Playoff National Championship game between Alabama and Clemson on ESPN.

The one-and-a-half-minute video opens with Danvers meeting up with Samuel L. Jackson’s Nick Fury at a restaurant. When the future S.H.I.E.L.D. director asks Danvers about the ongoing alien invasion on Earth, the she points out that the shape-shifting Skrulls are the ones who are infiltrating the human’s home planet. To prove that she is one of the good guys, Danvers casually shows off her amazing powers right in front of the low level bureaucrat. “That’s a proton blast. Skrulls can’t do that,” Danvers explains to Fury.

The trailer also teases the return of Clark Gregg’s Agent Coulson to the Marvel Cinematic Universe (MCU). In the trailer, Coulson is seen talking to Fury about Danvers in an elevator. While Coulson appeared to die in the first Avengers film in 2012, the character’s appearance in the upcoming movie isn’t really a surprise as events in Captain Marvel take place before the majority of the past MCU films — with the exception of Captain America: The First Avenger, which was set during the Second World War.

In addition to shots showing Danvers fighting in space, the teaser also features Jude Law’s character as the commander of Starforce and Danvers’ mentor.