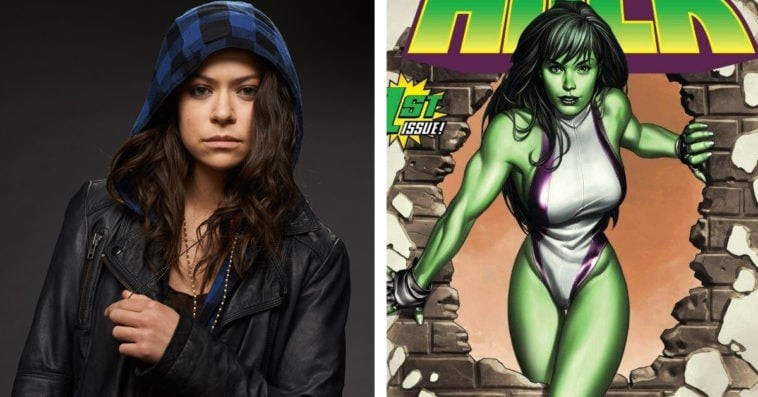 The Canadian actress, who is best known for her critically acclaimed performance in the sci-fi series Orphan Black, has been tapped to play the title role in Marvel’s She-Hulk series for Disney+.

In the comics, She-Hulk is Jennifer Walters, an attorney and cousin of Bruce Banner, aka The Hulk. An emergency blood transfusion from her cousin gives Walters her powers, but unlike Banner/The Hulk, She-Hulk was able to keep her intelligence and personality when she Hulked out.

First reported by Deadline on Thursday, Maslany’s casting came two days after the news outlet broke the news that Kat Coiro (It’s Always Sunny in Philadelphia, The Mick) would direct several episodes of the series, including the pilot. Rick and Morty scribe Jessica Gao, meanwhile, was hired to lead the writers’ room for the new Marvel Studios project.

Maslany won the Emmy for the Outstanding Lead Actress in a Drama Series in 2016 for playing multiple roles on Orphan Black. She also got two additional Emmy nominations and a Golden Globe nod for her performance in the same series, which ran for five seasons from 2013 to 2017 on Space and BBC America. Most recently, Maslany starred in the first season of HBO’s Perry Mason opposite Matthew Rhys, which has already been renewed for a second season.

Given all the acting awards and recognitions under Maslany’s belt, a lot of fans think that Marvel made the right decision to cast her in the role of She-Hulk. See some of the fan tweets about Maslany’s casting below:

Wow, not someone I had considered, but she’ll be perfect. If you haven’t watched Orphan Black please do so immediately.

Woh. I can see it. She has that inner…something fierce.

Glad you’re out there Tatiana. Are one of my favorite people. Brilliance should keep finding that audience.

I have never been a fan of this character, like most token comic book characters, but this is a fantastic hire. I might actually watch now.

Frigging love this casting. So good. Just outside the box enough, but still spot on somehow.

Maslany has yet to comment about her She-Hulk casting on social media, but Mark Ruffalo, who plays Banner/The Hulk in the MCU gave the actress a warm welcome on Twitter.

Though it’s not clear yet when the She-Hulk series will take place in the MCU timeline, The Hollywood Reporter revealed that Ruffalo has expressed interest in making an appearance in the show.

She-Hulk is one of the latest additions to the growing list of TV projects in development at Disney+ from Marvel Studios. Confirmed to premiere later this year, WandaVision is the first of these projects to be released on the streaming service. The Falcon and the Winter Soldier was originally slated to debut in August, but the coronavirus-induced production shutdown across Hollywood earlier this year changed those plans. Other Marvel Studios TV series in the works include Ms. Marvel, Loki, and Moon Knight.