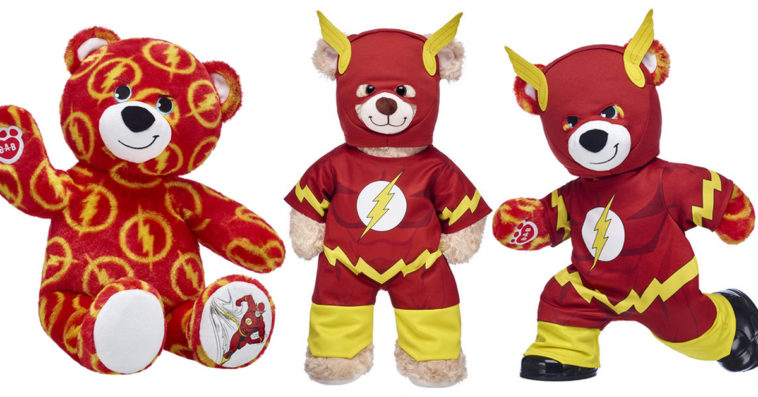 The Flash bear has a red and yellow fur color with an all-over pattern of the character’s iconic lightning bolt emblem. The left-foot paw of the cuddly stuffed toy features a photo of the Scarlet Speedster from the comics, while its right-hand paw has the signature B-A-B pawprint. The Flash bear can now be purchased at the Build-A-Bear Workshop website for $29 each.

The toy maker’s The Flash line also includes a two-piece costume that adorably emulates Barry Allen’s superhero suit. The gear’s main piece features the character’s lightning bolt logo, while the matching mask can instantly transform any Build-A-Bear plushie into a superhero. The cute The Flash costume retails for $16.

There’s also the complete The Flash bear gift set with a price tag of $52.50. In addition to The Flash bear and The Flash costume, the gift set includes a pair of black rubber boots priced at $7.50.

Other DC Comics characters that got the Build-A-Bear treatment are Superman, Wonder Woman, Harley Quinn, Batman, and Cyborg.

The Scarlet Speedster is being portrayed by Grant Gustin on The CW’s The Flash, which is currently on its fifth season. On the movie front, the fastest man alive is being played by Ezra Miller. Miller first appeared as The Flash in 2016’s Batman v Superman: Dawn of Justice. The 26-year-old actor then went on to reprise his role in Suicide Squad and Justice League. Miller is set to star in his own The Flash movie expected to be released in 2021.