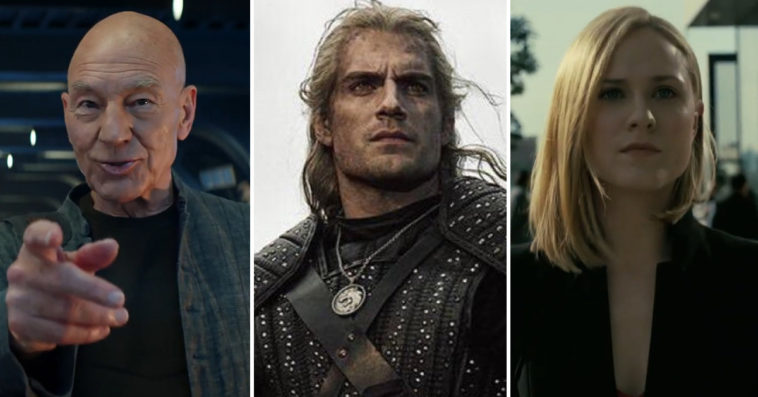 Every year, trailers for various highly anticipated TV series are released at San Diego Comic-Con (SDCC), and 2019 was no different. Below are 5 must-see TV show teasers that debuted at the comic book and pop culture convention last weekend.

Released on Saturday at SDCC, this two-minute trailer for Star Trek: Picard is full of mysteries and surprises. First off, the trailer introduces the mysterious character of Dahj (Isa Briones), a young woman in hiding who comes to Jean-Luc Picard (Patrick Stewart) for help. “Do you know who I am?” Dahj asks Picard early in the trailer. “Everything inside of me says I am safe with you.”

While the video doesn’t reveal Dahj’s true identity, her arrival in Picard’s life brings the former Enterprise captain back to action, as he and his new crew try to keep her safe from threats that put her life in danger.

Though the trailer also features a surprise appearance from Star Trek: Voyager’s Seven of Nine (Jeri Ryan), that isn’t the video’s jaw-dropping moment. The reveal that has rocked the Trekkies the most is the fact that Data (Brent Spiner) is going to be on the show.

Data memorably sacrificed his life in 2002’s Star Trek: Nemesis, so no one saw it coming when he’s revealed playing cards with Picard at the end of the trailer.

Star Trek: Picard will premiere on CBS All Access in 2020.

In conjunction with The Witcher’s SDCC panel on Friday, Netflix debuted the official teaser for the fantasy action drama series starring Henry Cavill as the titular role. Featuring huge battle scenes, burning cities, and magic, the two-minute clip proves that the show could be Netflix’s answer to HBO’s Game of Thrones. And while the series doesn’t seem to have dragons, its world is full of monsters just like the giant spider-like creature that comes out of swamp at the end of the teaser.

The Witcher is expected to be released on Netflix between October and December this year.

HBO has already dropped three promo clips for the third season of Westworld, but the most recent one released just this Saturday at SDCC provides the best look at all the surviving characters following the mass killings at the end of the show’s sophomore run.

In one of the scenes at the start of the three-minute-long clip shows, Dolores (Evan Rachel Wood) picks up one of four spherical host control units as she sits with a character played by Tessa Thompson. But because Dolores killed Thompson’s character, Charlotte Hale, at the end of season 2, the trailer is likely showing Charlotte’s host version. However, what robot’s essence now lives inside the Charlotte host body remains unclear.

While Dolores managed to break free to the outside world at the end of season 2, Bernard (Jeffrey Wright) seems to still be in the park, and is shown repairing an injury to his arm. “Ford (Antony Hopkins) made each of us for a reason, even Dolores,” says Bernard as a shot of naked hosts held in cold storage is shown in the trailer. “I came back to find someone who could help me, someone strong enough to stop her if it comes to that.”

But the trailer’s most exciting reveal is the return of Maeve (Thandie Newton), who was also killed at the end of season 2. As seen in the promo clip, the host is back up and running in a new World War II-themed park.

Westworld season 3 will premiere on HBO in 2020.

Also on Saturday, Amazon dropped a teaser for the fourth season of The Expanse at SDCC. The upcoming season is based on Cibola Burn, the fourth installment of James S.A. Corey’s The Expanse novel series that serves as the source material of the TV show.

In the new season, the Rocinante crew is dispatched to a colonial world known as Ilus to settle a dispute between the settlers who touched down on it first and the Royal Charter Energy, the corporation that claimed the world. The teaser shows some of the troubles that the Rocinante crew will have to deal with in Ilus, as well as some new faces, like Adolphus Murtry (Burn Gorman) who is the Royal Charter Energy’s brutal and temperamental security chief.

In addition to the teaser, Amazon also released a longer sneak peek showing the Rocinante crew landing on Ilus.

The Expanse season 4 is set to debut on Amazon Prime Video on December 13th.

Syfy released the trailer for the fourth season of Van Helsing during the show’s Thursday panel at SDCC. The bloody four-minute clip shows Vanessa Van Helsing (Kelly Overton) and her allies trying to reclaim a world dominated by vampires. That, however, won’t be easy, as Dracula (Tricia Helfer­) and other new villains will be wreaking havoc in the new season.

In addition to Helfer, other new faces seen in the trailer include Nicole Munoz and Keeya King. Munoz will play Jack while King will portray Violet, the daughter of Neal McDonough’s Boss.