A gigantic build of the recently unveiled LEGO Super Mario The Mighty Bowser set will be displayed at San Diego Comic-Con later this week as part of the brand’s activation at the annual pop culture convention.

The king-sized version of Mighty Bowser is a complex build made up of 662,872 bricks and was completely assembled in 3,290 hours. Operated by a control panel, the model’s arms, head, eyes, eyebrows, and jaw all move and are accompanied by sound effects and background music. Fans of all ages can marvel at the King of the Koopas in all his powerful glory as part of the Nintendo booth (#235) on the show floor at San Diego Convention Center starting July 21st through 24th.

Introducing the king-sized version of LEGO Super Mario The Mighty Bowser – a massive build like never before: a fully animated 663,900 pieces, taking over San Diego Comic-Con 21-24th of July. pic.twitter.com/nzbU9Ls7Gr

“Bringing The Mighty Bowser to life in this unique representation was the natural choice and very much in line with what we offer in LEGO Super Mario,” said Federico Bagher, Head of Global Marketing at the LEGO Group, in a press release unveiling the first look at the massive LEGO build. “In our theme, we bring together interactivity and brick building. The same can be said of this king-sized version of Bowser, who is as ferocious as he is fun. With its movements and sound effects, this massive build is one of our most interactive to date, and one that we absolutely loved building. We’re excited to share it with everyone at Comic-Con this year.”

The king-sized Mighty Bowser is a nod to the abovementioned smaller, more manageably sized LEGO Super Mario The Mighty Bowser building kit, which was unveiled earlier this month.

A perfect display piece, the original Mighty Bowser buildable LEGO model, including its display stand, measures over 12.5 in. (32 cm) high, 16 in. (41 cm) wide, and 11 in. (28 cm) deep, making it the biggest LEGO Bowser set for commercial sale. The 2,807-piece LEGO set features newly designed LEGO elements to recreate the look of the character’s iconic spikes. 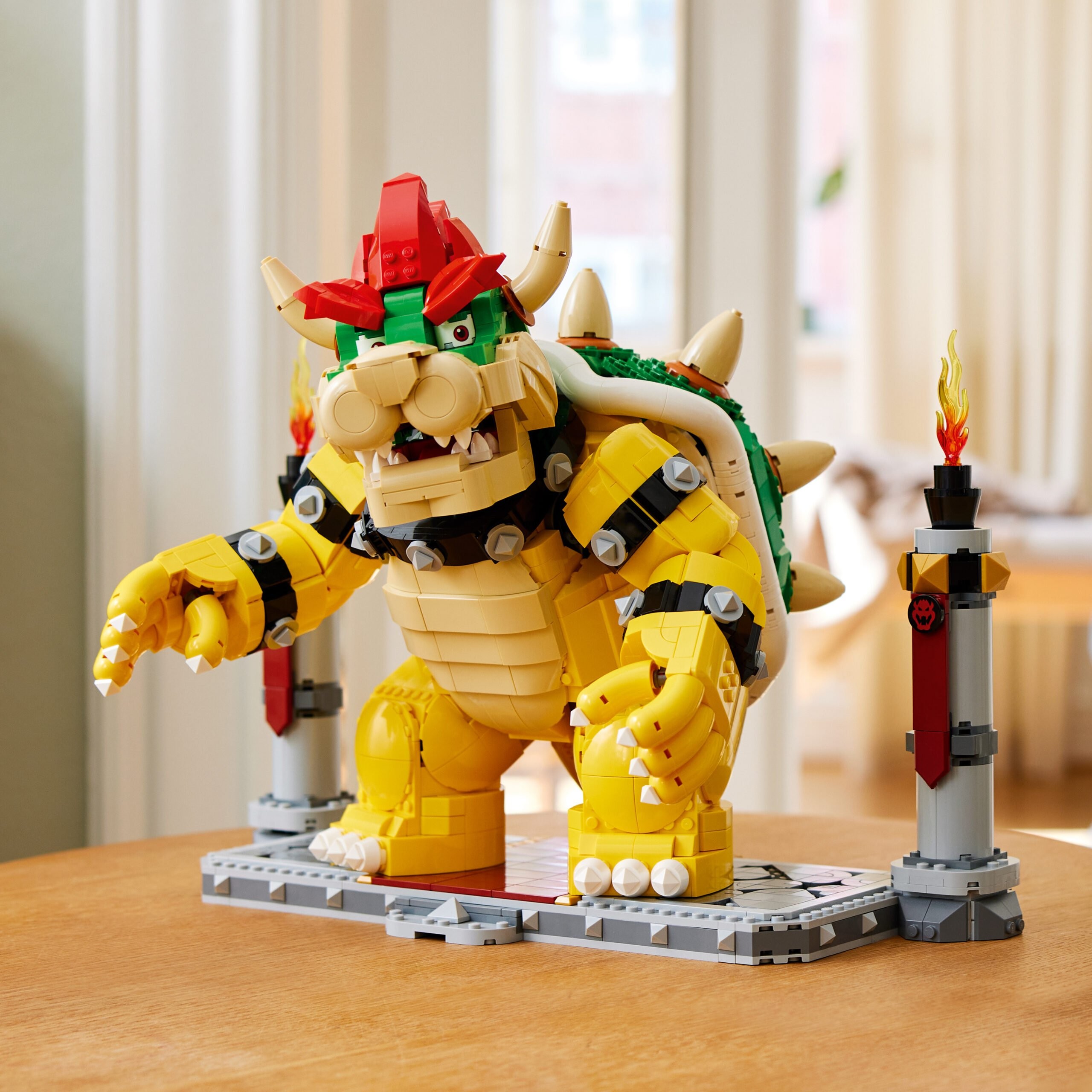 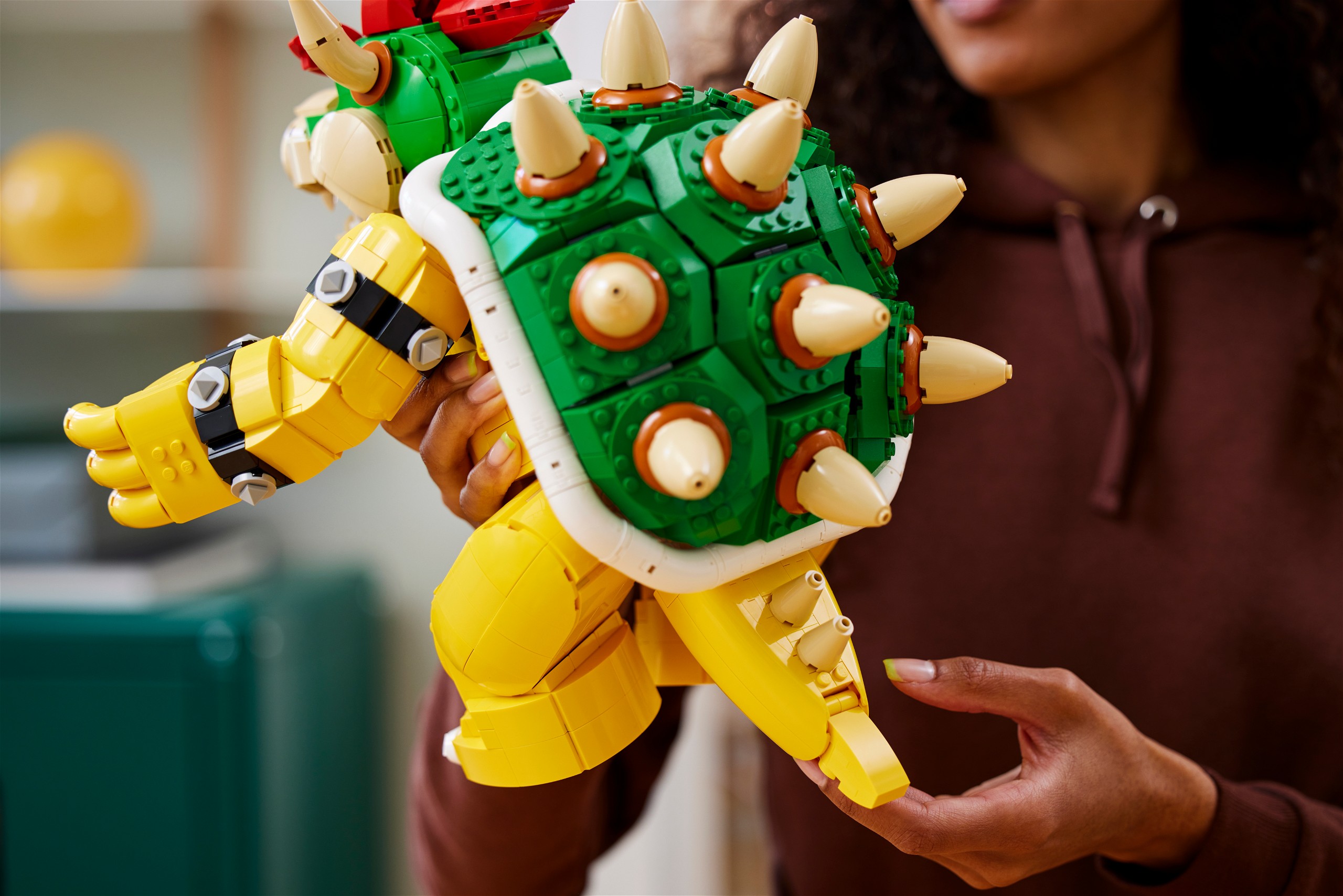 This buildable figure of the King of the Koopas also features a fireball launcher found inside Bowser’s mouth and comes with a button to control Bowser’s head and neck movements. His mouth, arms, legs, and tail are also movable, letting fans replicate the fearsome nature of the ultimate boss villain that they know and love from Super Mario games.

The building set, which comes with step-by-step instructions, also has an interactive element. Fans that own a LEGO Super Mario Starter Course, expansion sets, and character packs can choose to battle Bowser against LEGO Mario, LEGO Luigi, or LEGO Peach, allowing for truly immersive and digitally enhanced play.

Lastly, this character model of Bowser is part of LEGO’s Adults Welcome series, which has been long-anticipated by Adult Fans of LEGO (AFOLs) who want to challenge themselves with a detailed set that will truly bring back fond memories of the past.

Where to buy LEGO Super Mario The Mighty Bowser

Priced at $269.99, the buildable model of Bowser, which makes a great gift, will be available for purchase from October 1st on LEGO.com and from select leading retailers around the world. This 2,807-piece LEGO recreation of the King of the Koopas features controllable movements and a fireball launcher