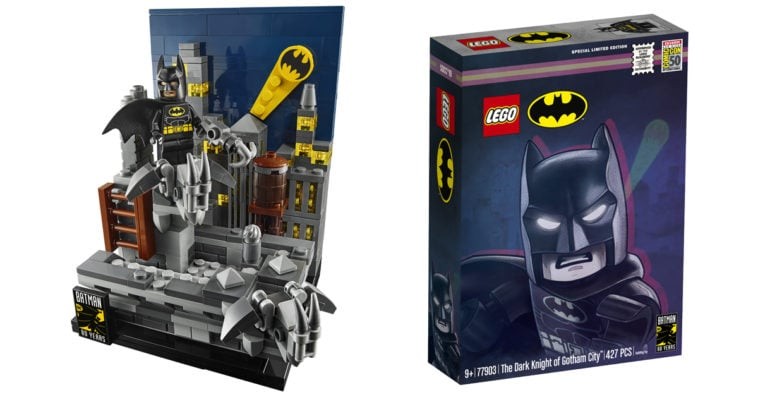 Called The Dark Knight of Gotham City, this 427-piece building set features Bruce Wayne’s vigilante alter ego standing high on a building with gargoyle statues. Behind him is a view of Gotham’s skyline featuring yellow-lit buildings, a water tower, and the attention-grabbing Bat Signal flashing in the night sky.

This playset only includes 1 minifigure: the long-eared Batman equipped with a grapple gun.

The striking diorama comes with the special Batman 80th anniversary logo, making it perfect for display at home or office.

The Dark Knight of Gotham City LEGO set is one of the three building sets that the toy company will launch at SDCC. The other previously announced SDCC exclusive LEGO set is the Captain Marvel and the Asis. The third playset, meawhile, has yet to be revealed.

The Dark Knight of Gotham City LEGO set is priced at $45, but not all SDCC attendees can purchase it at the convention. For a chance to buy the toy set, attendees will have to enter a submission of interest through the SDCC 2019 Exclusives Portal beginning the last week of June.

Whether they win or not at the Exclusives Portal Lottery, Batman fans also have the option to purchase the six 80th anniversary Batman LEGO sets unveiled by the brick company last March. Available in major retail stores starting August 1st, these LEGO sets feature some of the iconic vehicles of the Dark Knight, including the Batcycle, Batmobile, Batwing, Bat Tank, and the Bat Chopper.

The SDCC International 2019 will officially kick off on July 18th and will run until the 21st.