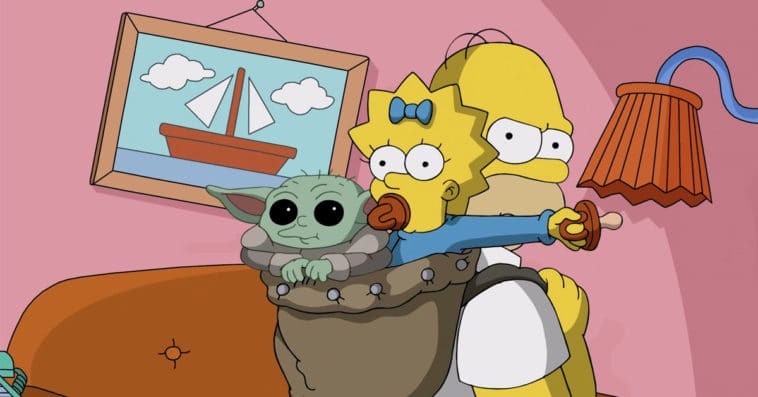 Baby Yoda made a surprise appearance in a special The Simpsons short made exclusively for Disney’s investors.

Shown at Disney Investor Day on Thursday, the video has yet to be made public. But in an image from the short shared by Decider managing editor Alex Zalben on Twitter, Baby Yoda from the hit Disney+ series The Mandalorian is seen being carried by Homer Simpsons in a backpack with his youngest child, Maggie.

As for why Homer is carrying Baby Yoda in a backpack, Screen Rant reported that it has something to do with beer, which is Homer’s most favorite drink. After talking about some of the great movies, series, and other forms of content available to stream on Disney+, Homer reportedly got candid and started to tell viewers that he was promised beer for his participation in the short. The alcoholic beverage hadn’t arrived yet, and if it didn’t come sooner rather than later, Homer promised to leave and take “this guy” with him. The “guy” he’s referring to was, of course, Baby Yoda.

Though Baby Yoda shared the screen with Homer and Maggie only for a moment, it’s enough for fans of both The Mandalorian and The Simpsons to experience what it would be like to watch a crossover of sorts between the two shows.

Several real-life celebrities and fictional characters have already guest starred on The Simpsons over the years, so it won’t be surprising if Baby Yoda ends up appearing in an actual episode of the animated series in the future.

Last week’s episode of The Mandalorian, titled Chapter 15: The Believer, is the first installment of the Star Wars spinoff series to not feature Baby Yoda. The fan-favorite character, whose real name is Grogu, was last seen in Chapter 14: The Tragedy. In that episode, Din Djarin (Pedro Pascal) finally took Baby Yoda to the Jedi Temple on Tython but ended with The Child being captured by Moff Gideon’s (Giancarlo Esposito) Dark Troopers and taken to his cruiser, where he was imprisoned inside a holding cell.

Meanwhile, The Simpsons returns from a two-week hiatus with season 32, episode 11, titled The Dad Feelings Limited, on Sunday, January 3rd, 2021 at 9 p.m. ET on Fox.