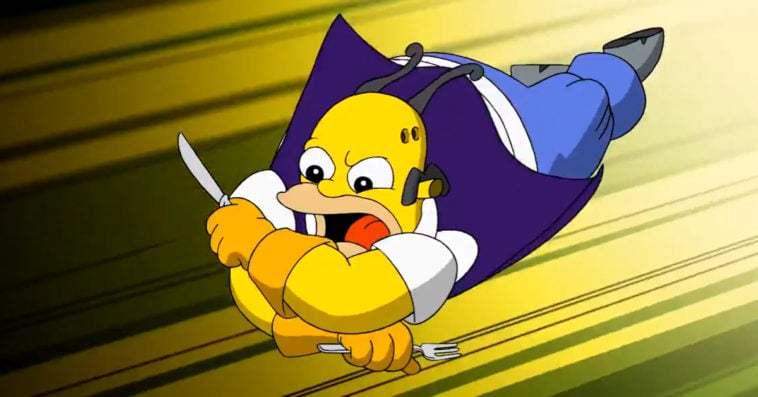 The Simpsons has introduced a new anime version of Homer in its Treehouse of Horror XXXI episode that aired last Sunday on Fox.

Titled Into the Homer-Verse, the second segment of the Halloween special parodies the 2018 Oscar-winning animated film Spider-Man: Into the Spider-Verse and features a bunch of Homers from different dimensions.

The segment opens with Homer realizing that he has eaten all of the Halloween candies before the big day. While walking around the nuclear power plant looking for candies, he comes across a mysterious machine. When he tries to use it, the machine explodes and summons Homer Barbera, Disney Princess Homer, Noir Homer, and Anime Homer, who all wreak havoc in Springfield. To stop the chaos, Marge opens a Duff, luring all the Homers to the Simpsons’ residence.

While Homer tries to figure out the multi-verse ordeal, the show takes a moment to honor the anime visual style with a fun clip of Anime Homer attacking a strip of bacon. The scene, which you can watch below, was shared online by the show’s official Twitter account.

When Homer starts changing into other variations of himself, Lisa says they need to get all the Homers back to the power plant in order to end the crisis, or Homer will die over and over again. At the end of the segment, the Homers face off against a multiverse of Mr. Burns ― including Maleficent Burns, Bowser Burns, and Mecha Burns ― which ultimately builds up to the anime-style showdown between Anime Homer and Mecha Burns.

New and improved enemies — available in assorted styles, now with more evil than ever. 😈 pic.twitter.com/MbiXf1q5fu

This isn’t the first time The Simpsons has featured an anime version of Homer. The clip below from 2014’s Treehouse of Horror XXV shows different iterations of the titular family, including one that is anime-inspired.