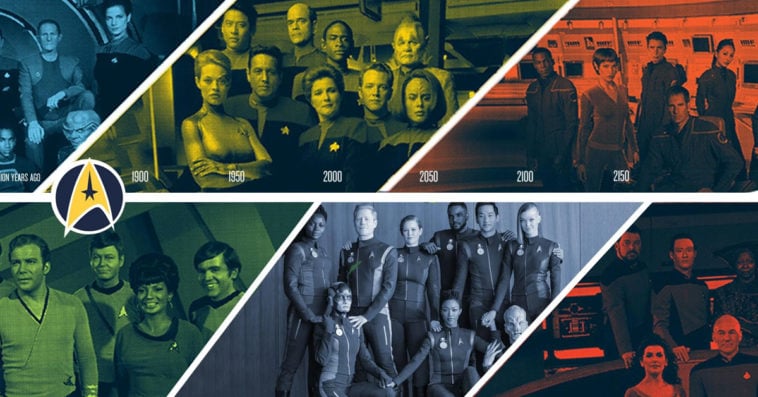 The updated official timeline for the entire Star Trek franchise has been unveiled on Tuesday as part of this year’s celebration of Star Trek Day.

The updated official timeline can be seen in a new video posted on StarTrek.com, which is actually a longer version of a clip released back in November 2019.

The original video laid out some of the most significant events in the Star Trek franchise starting from the Big Bang that the Star Trek: Voyager crew visited in the Death Wish episode through the destruction of Romulus in 2387. That timeline has expanded in the new video, with Star Trek: Lower Decks, Star Trek: Picard, and season 3 of Star Trek: Discovery being added to the latter half of the chronology.

The updated timeline also features the 930-year time jump between seasons 2 and 3 of Star Trek: Discovery, which will be bringing its characters into an era where no Star Trek project has ever gone before when it returns to CBS All Access this October. The updated timeline also adds Michael Burnham’s 2247 graduation from the Vulcan Science Academy.

The updated timeline also highlights a number of relevant events in Christopher Pike’s career, including his taking command of the Enterprise in 2250, the events of The Cage and the accident he suffers, as well as his appearance in season 2 of Star Trek: Discovery. This emphasis on the highs and lows of Captain Pike’s career appears to be some sort of promotion for the upcoming TV series Star Trek: Strange New Worlds, which will center on the USS Enterprise under his command.

Since the Star Trek universe continues to expand, the video aptly ends its three-minute run with the phrase “To be continued…” In addition to the aforementioned Star Trek: Strange New Worlds, other upcoming Star Trek series include the Star Trek: Discovery spinoff Section 31 and the animated Nickelodeon series Star Trek: Prodigy. While no new Star Trek movie has been officially announced yet, Deadline reported last month that the top priority of new Paramount Pictures president Emma Watts is to figure out the best way to reboot Star Trek on the big screen.