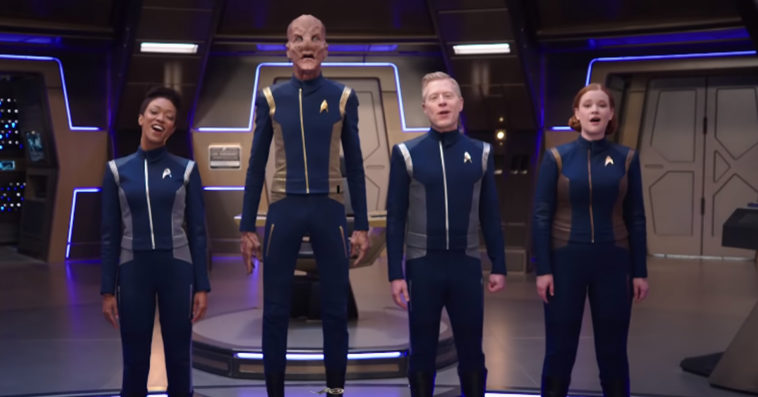 Rapp, who originated the role of Mark Cohen in the Broadway production of Rent, leads the minute-long spoof, which alters the song’s lyrics to honor the fans of the space opera franchise. “There’s one reason this franchise thrives,” the quartet sings. “The answer is: nerds! Thanks to the nerds! Shout out to nerds!” This particular segment was filmed inside the bridge of the USS Discovery with the stars wearing their iconic blue duty uniforms.

If you love musical theater AND @startrekcbs you better stop reading and just smash that play button.

Elsewhere in the episode, the group sings along to Gloria Gaynor’s I Will Survive, Ed Sheeran’s Shape of You, David Bowie’s Space Oddity, and KC and The Sunshine Band’s That’s the Way (I Like It) while driving around Toronto, Canada where Star Trek: Discovery is being filmed. Jones also recalls his wild disco days and the rest of the group talks about their nerd habits and history in between the singalongs. They also give random passers-by the Vulcan salute, much to their delight.

The full 15-minute episode is available to stream on Apple TV and Apple’s iOS TV app. You can also watch it via Apple Music on Macs.