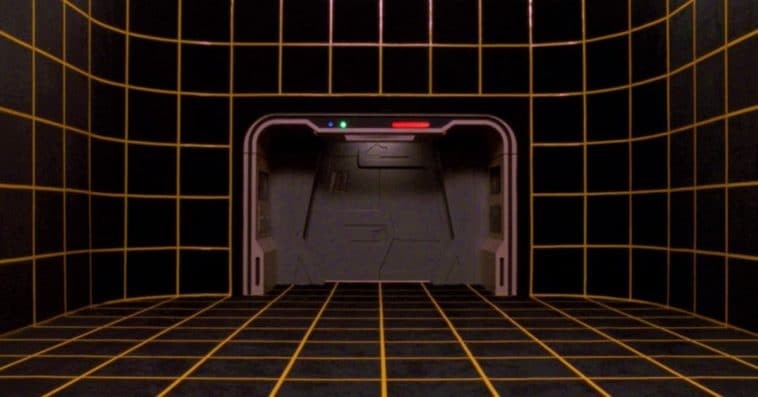 After finally making contact with Starfleet of the 32nd century, USS Discovery underwent a three-week retrofit in last week’s Scavengers episode of Star Trek: Discovery. As part of the retrofit, programmable matter was installed into the Discovery’s control surfaces and older style nacelles were replaced with detachable nacelles, which improved the starship’s maneuverability and enabled her to be more efficient in flight.

“The retrofit’s finally done and we’re catching up on 900 years of technology, which is going so well that I now have to install pattern buffers around every fresher in the damn ship,” Reno says in the recording. “And don’t get me started on programmable matter. How the hell am I supposed to put that back together when it breaks? Little pieces of … whatever they are.”

She continued: “New holodecks are cool, though. Risa sounds good right about now … Me. A beach. No one around as far as the eye can see except may be the cat. I feel like I could deal with the cat.”

While Discovery’s new holodecks have yet to debut on the show, Reno’s personal log ― which was posted on the official Star Trek: Discover Logs Instagram account ― suggests that she fancies the idea of “vacationing” on the lush resort planet of Risa using one of the new holodecks.

For those who are not familiar with what a holodeck is, it’s basically a stage where users may engage with different virtual reality environments. Holodecks are installed aboard starships, space stations, and at Starfleet institutions for use in entertainment, training, and investigative purposes. Although a holodeck is supposed to be a safe alternative to reality, the Star Trek franchise has featured holodeck-gone-bad plots, in which real-world dangers become part of what is supposed to be a controlled environment.

Interestingly, a holodeck-like technology was already featured in Star Trek: Discovery back in season 1.  In the Lethe episode, Captain Gabriel Lorca (Jason Isaacs) and Ash Tyler (Shazad Latif) went through a training simulation in a room aboard the ship, which may actually be a holodeck but likely an old one.

A new episode of Star Trek: Discovery season 3 premieres on CBS All Access every Thursday.