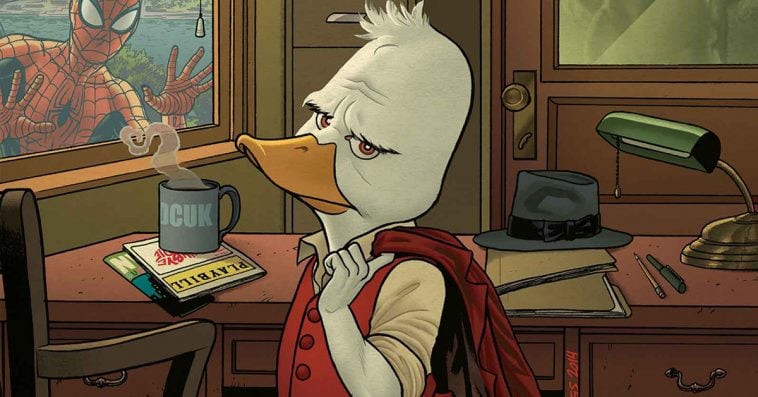 Despite the impending shut down of Marvel Television, its previously announced Howard the Duck series is still moving forward at Hulu.

During a recent episode of his Fatman Beyond podcast with Marc Bernardin, series writer and producer Kevin Smith said that the recent restructuring at Marvel brought about by Kevin Feige’s promotion to chief creative officer as well as the imminent exit of Marvel Television head Jeph Loeb hasn’t had any impact on his Howard the Duck animated series.

“Now, Marvel TV won’t cease to exist; it’s just becoming this different version,” Smith said of the plan for Marvel Studios to absorb Marvel Television. “I hear the Hulu shows are still alive. So far, so good for Howard the Duck. I’ll let you know if anything happens.”

And though Smith is sad to see the era of Marvel Television come to an end, he said that he’s looking forward to seeing what Marvel is about to do next.

Announced back in February, Marvel’s Howard the Duck is part of the four inter-connected animated series that will culminate in a special event called Marvel’s The Offenders. The three other series completing the lineup are Marvel’s M.O.D.O.K, Marvel’s Hit-Monkey, and Marvel’s Tigra & Dazzler Show.

While Smith didn’t share any additional details about Howard the Duck during the podcast, Smith mentioned at San Diego Comic-Con last July that they hadn’t started working on the series yet.

“In terms of the order of the shows, right now, our show goes last,” Smith said at the time. “Right now it’s MODOK, then Hit-Monkey, then Dazzler & Tigra, then Howard the Duck. My partner on that show is the brilliant Dave Willis who created Aqua Teen Hunger Force. He’s the sensibility that you want to go along with Howard. I’m there, I’ll give it my all, but Steve Gerber’s Howard was genre-bending.”

READ  Here’s how much money Robert Downey Jr. has made from playing Iron Man

Smith continued: “We need a genre-bender to come in and work on the show, so Dave is putting together a writers’ room that I’ll add some people to, too, and then we’re going to be moving forward within the next two months our writers’ room opens up. We’re a year away from the cartoon, to be honest with you, but I’m sure it will be good, because Marvel doesn’t do anything bad.”