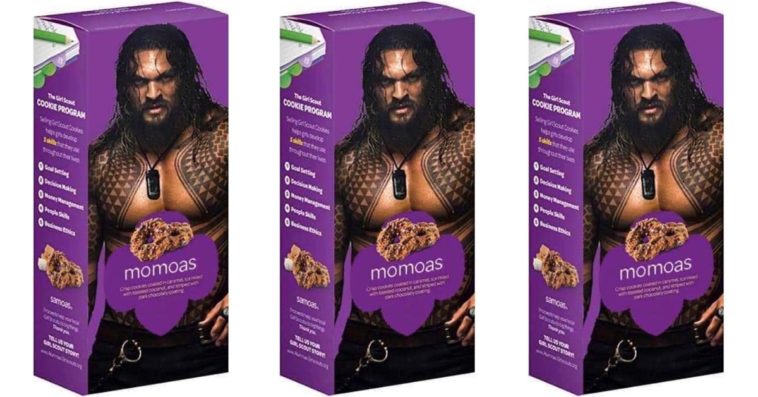 Colorado-based Girl Scout Charlotte Holmberg gained the title Top Cookie CEO after selling more than 2000 boxes of cookies in 2018. Hoping to keep that title this year, Holmberg upped her game by rebranding her Samoa cookies as Momoas, a term inspired by Aquaman star Jason Momoa.

But Holmberg’s marketing strategy didn’t end there, as the fifth grader also redesigned her cookie boxes to include a shirtless photo of Momoa from the DC superhero movie — an idea that made her supply of cookies quickly sold out.

There’s been no official word from Momoa or the film producer Warner Bros. Pictures about the use of the star’s likeness. But as of February 28th, Girl Scouts of the USA said that Holmberg is no longer using the image to sell cookies.

‪Thank you Kim Christiansen and Kristen Aguirre of 9NEWS (KUSA) for supporting Girl Scout Charlotte and purchasing a package of Jason Momoa Samoas!

Posted by Girl Scouts of Colorado on Wednesday, February 13, 2019

“She only made approximately 35 of these boxes to deliver to acquaintances, and never had any intention of mass marketing these particular boxes to consumers,” Girl Scouts of the USA told CNN. “Once those boxes were sold, she continued with her Girl Scout Cookie season as usual.” Girls Scouts of the USA also made it clear that Holmberg only used Momoa’s photo in marketing her cookies “as an inside joke with her friends and family.”