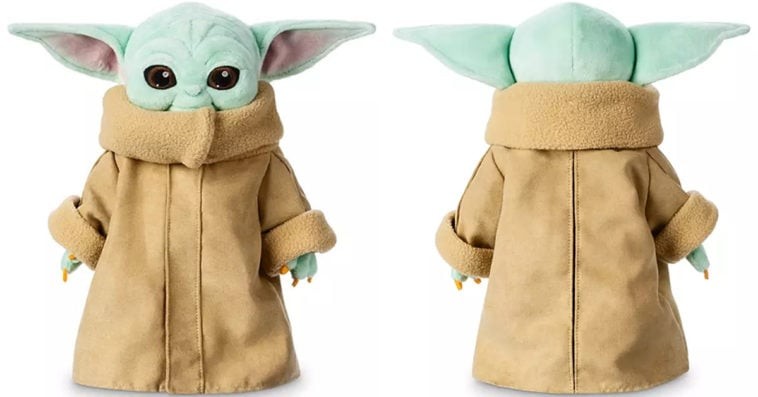 After months of demand from Star Wars fans, Disney finally released its official Baby Yoda plush this past weekend. The good news, however, was short-lived, as The Mandalorian merchandise quickly sold out moments after it went live on ShopDisney.

The soft, cuddly stuffed toy stands 11 inches tall and features a faux suede coat and fuzzy trims. Baby Yoda’s big yet adorable eyes are achieved with detailed embroidery, while the wrinkles on his forehead are made visible with fine machine stitching.

Fans that were able to pre-order the plush toy for $24.99 will have to wait for at least two months before getting their hands on the merchandise, as shipping for the item is expected to start on April 20th. Unfortunately for those who were late to the party, there’s no word on when the plush toy will be restocked.

Hasbro and Bioworld also have their own Baby Yoda plush toys, but both items are also out of stock.

While it seems that Disney missed a huge opportunity to make more money after not getting any Baby Yoda merchandise prepared well in advance, the Mickey Mouse company revealed that they deliberately delayed the development and production of Baby Yoda items in order to keep the secrets of The Mandalorian series.

“We didn’t tell anybody about that character’s presence in the series, or even the first episode,” Disney CEO Bob Iger said on The Star Wars Show last December. “I know a lot has been said about the Christmas season and everybody wants to buy The Child toys and et cetera and so on, and they’re not really out there. That’s because if we had given the design out, it would have gone out to hundreds and hundreds of people, probably all over the world, and we didn’t want to do that. So people will have to wait, which I think actually is a good thing in this case.”

Hopefully, fans will be able to get their Baby Yoda merchandise by the time The Mandalorian Season 2 arrives on Disney+ this fall.