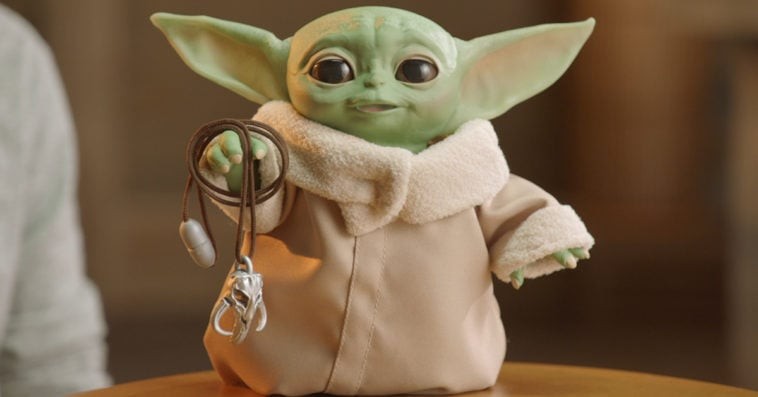 A number of new Baby Yoda toys were unveiled at Disney’s Star Wars toy showcase in New York City on Thursday. And among all The Mandalorian merchandise displayed at the event, the one that really stood out was the Baby Yoda animatronic toy from Hasbro.

The toy not only looks like The Child from the hit Disney+ series, but it also sounds and moves like the real thing. Touching the top of the toy’s head activates over 25 sound and motion combinations, including coos, giggles, and babbles. The toy’s ears also wiggle; its eyes open and close; and its head moves up and down and quirks from side to side.

Every so often, the animatronic toy tries to harness the power of the Force by raising one of its tiny arms with its eyes closed. It also sighs as if exerting a great amount of energy and take a “Force nap” when laid down.

This Baby Yoda toy makes over 25 sound and motion combinations, including happy and excited sounds, giggles, babbles, and more

Hasbro’s Baby Yoda animatronic toy comes with a Mandalorian pendant, and is powered by two AAA batteries, which are included. The toy, however, doesn’t include the bassinet seen in the video below:

The animatronic toy is set to hit most major retailers this fall, but is now available for pre-order at Entertainment Earth for $59.99, with shipping slated for December.

In addition to the Baby Yoda animatronic toy, other recently revealed Baby Yoda-themed toys from Hasbro are The Mandalorian editions of the tabletop games Operation ($19.99) and Trouble ($14.99). Both toys will be available at Amazon and Walmart this spring.