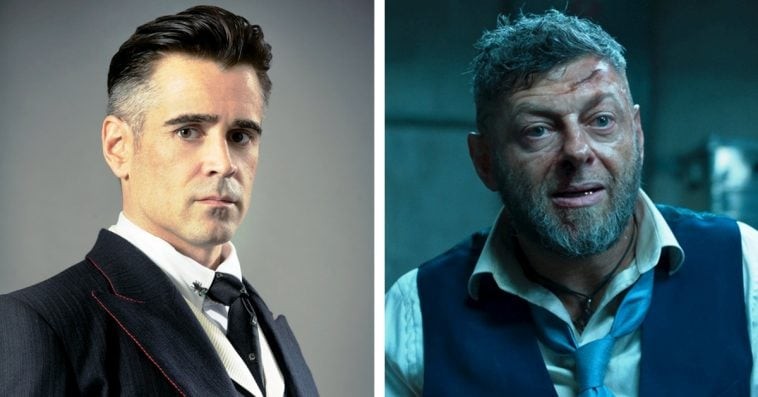 Warner Bros. is looking to add more star power to the cast of Matt Reeves’ The Batman.

According to Deadline, Colin Farrell is in negotiations with the film studio to play The Penguin in the next big-screen iteration of the Caped Crusader. The Wrap, meanwhile, reported that Andy Serkis is in talks to portray Bruce Wayne’s legendary butler, Alfred Pennyworth.

Should Farrell and Serkis both finalize a deal with Warner Bros., they will join an already-star-studded cast that includes Robert Pattinson as the Dark Knight, Zoe Kravitz cast as Selina Kyle, aka Catwoman, Paul Dano as The Riddler, and Jeffrey Wright as Jim Gordon.

Farrell most recently star as Holt Farrier in Disney’s live-action adaptation of Dumbo. He also played the role of Percival Graves in Fantastic Beasts and Where to Find Them. The Irish actor is not a stranger to the comic book world, as he portrayed Bullseye in the 2003 Daredevil movie opposite Ben Affleck’s Matt Murdock.

Serkis, meanwhile, is best known for his role as Caesar in the last two Planet of the Apes movies, which are both directed by Reeves. He also played the Marvel character Ulysses Klaue in last year’s Black Panther and in 2015’s Avengers: Age of Ultron. His other notable acting credits include The Lord of the Rings Trilogy, Star Wars: Episode VII – The Force Awakens, and Star Wars: Episode VIII – The Last Jedi, among many others.

While many fans are hoping that Serkis and Reeves would reunite in The Batman, the former has another upcoming comic book project that may prevent him from taking on the role of Alfred. Serkis was recruited by Sony to direct Tom Hardy and Woody Harrelson in Venom 2. According to ComicBook.com, the sequel is expected to begin filming early next year, and that may potentially cause some overlap with The Batman. But if Alfred only has a small role in the DC movie, it’s likely that Serkis would do both projects at the same time.