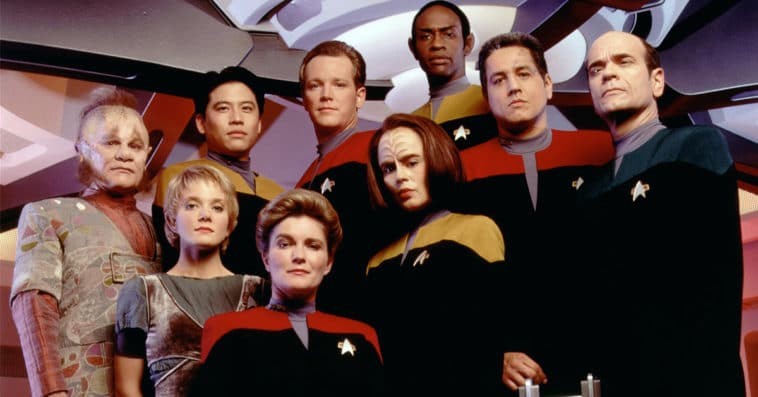 After earning around $455,000 on its March 1st launch date, the campaign surpassed Indiegogo’s record for day-one donations towards a documentary. And as of this writing, the campaign has already collected over $655,000 from 6300 plus backers, making it the site’s highest-funded documentary campaign ever. That title was previously held by 455 Films’ documentary What We Left Behind: Looking Back at Star Trek: Deep Space Nine, which earned a total of $647,891 at the end of its campaign run.

Because of the overwhelming monetary support from Trekkies, 455 Films has added new stretch goals and unveiled new perks for backers, including a Zoom experience with Star Trek: Deep Space Nine actress Terry Farrell and a chance to guest host the podcast The Delta Flyers, which is presented by Star Trek: Voyager stars Robert Duncan McNeill and Garrett Wang.

Original Story (March 1st): 455 Films, the production team behind some of the most beloved Star Trek documentaries, has launched a crowdfunding campaign for its upcoming Star Trek: Voyager Documentary.

To fund the project that will commemorate the 25th anniversary of Star Trek: Voyager, 455 Films kicked off an Indiegogo campaign on Monday with a video featuring series stars Garrett Wang (Harry Kim) and Tim Russ (Tuvok), as well as cameo appearances by Alice Krige (Borg Queen) and Star Trek: Enterprise’s Connor Trinneer (Charles Tucker III). You can check out the three-minute pitch video below:

On the campaign site, 455 Films said that the cast and crew of Star Trek: Voyager deserve the highest recognition, and with the help of Trekkies all around the world, they’re making that happen through a documentary that will revisit, celebrate, and fully explore what made the Star Trek series so special over 25 years after it premiered.

The Star Trek: Voyager Documentary is still in the early stages of production with more interviews and support footage yet to be filmed. Once filming is complete, expenses for editing, music, animation, color-correction, sound mixing, CBS/Star Trek footage licensing, and other post-production costs will need to be covered. 455 Films stated that the more money they raise through the campaign, the more creative ways they have to make the documentary exceptional.

As of this writing, the campaign has already collected about $420,000 from 4000 plus backers, and has surpassed its initial goal and first three stretch goals.

Like any other crowdfunding campaign, this one offers a number of amazing rewards to those who will provide monetary support. Those rewards include Worlds of the Delta Quadrant post-cards 8-pack, Fansets officially licensed lapel pins, Voyager Doc shirts, Zoom virtual experiences, Away Missions ― aka trips to Star Trek filming locations and opportunities to meet cast members ― and the Voyager Doc swag bag, which includes a replica of Captain Kathryn Janeway coffee mug.

455 Films is also the maker of Star Trek documentaries What We Left Behind, For the Love of Spock, Chaos on the Bridge, The Captains, The Captains Close Up, Still Kicking, and Get a Life.