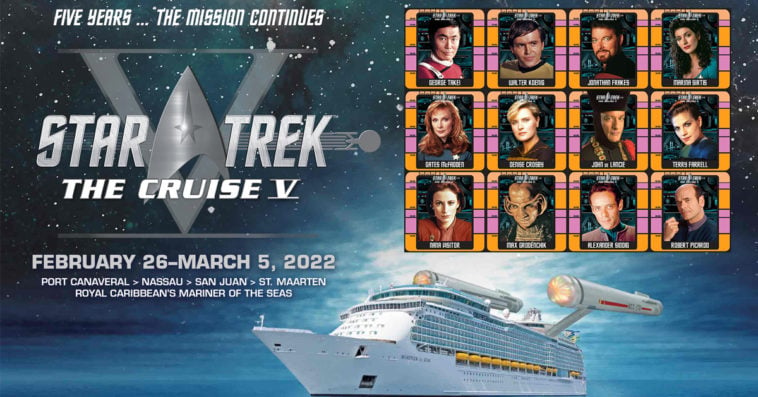 The fifth voyage of Star Trek: The Cruise has been delayed for a year due to the COVID-19 pandemic.

Entertainment Cruise Productions announced on Tuesday that Star Trek: The Cruise V, which was originally scheduled for 2021, has been postponed to February 26th – March 5th, 2022.

Thanks to the $120 million revitalization of the Mariner of the Seas, passengers will also get to enjoy the ship’s new Sky Pad virtual-reality bungee trampoline, FlowRider surf simulator, Playmakers Sports Bar & Arcade, as well as new dining options and upgraded accommodations.

“We are committed to helping our entire universe remain safe and have been working closely with the cruise industry to make sure the health of our guests, actors and staff come before everything else,” Greg Laubach, executive director, business development at Entertainment Cruise Productions said in a statement. “We’re especially grateful to all of the Star Trek actors who were originally planning on joining the 2021 sailing and will all be on board in 2022. We can’t wait to see all of you again.”

Below is the current list of Star Trek actors that are confirmed to join the 2022 cruise:

Star Trek: The Next Generation

Cabin prices for Star Trek: The Cruise V start at $1,600 per person, which includes admission to all performances, interviews, parties, and meals. Open booking begins on Tuesday, July 28th at 11 a.m. ET via startrekthecruise.com or by calling 844-335-6515.