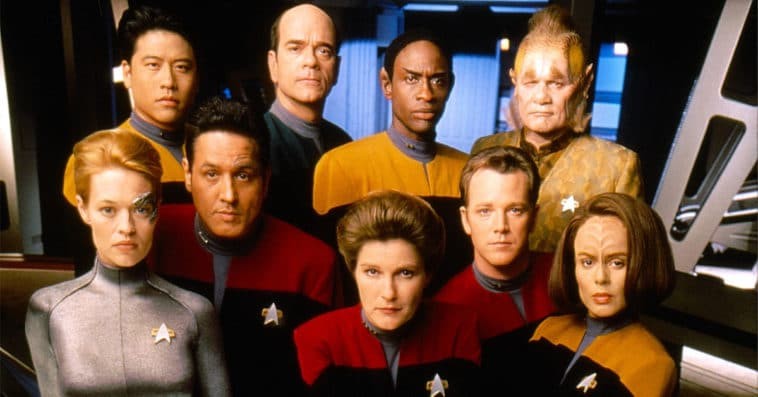 A number of Star Trek: Voyager cast members have recently reunited aboard the Star Trek: The Cruise.

Tim Russ, who portrayed Tuvok in the ‘90s sci-fi series, took to Twitter last week to share a picture of himself with his former co-stars Roxann Dawson (B’Elanna Torres), Kate Mulgrew (Kathryn Janeway), Jeri Ryan (Seven of Nine) Robert Picardo (The Doctor), Garrett Wang (Harry Kim), and Ethan Phillips (Neelix). “My Voyager castmates from the Trek Cruise! It was good to see them again,” Russ captioned the photo.

My Voyager cast mates from the Trek Cruise! It was good to seem them again. pic.twitter.com/Y1Riy4ztH9

The actors were aboard the cruise to celebrate the 25th anniversary of Star Trek: Voyager. They were also there to film portions of a new documentary that will commemorate the silver anniversary of the fifth series in the entire Star Trek franchise.

The yet-to-be-titled documentary is a project of 455 Films, the studio behind Star Trek documentaries The Captains, Chaos on the Bridge, and For the Love of Spock. The film studio’s president, David Zappone, also served as an executive producer and co-director on last year’s What We Left Behind: Looking Back at Star Trek: Deep Space Nine.

In addition to the show’s cast, the movie’s crew will also film testimonials from Star Trek: Voyager fans aboard the cruise.

In line with the 25th anniversary of the show, Ryan was recently asked if she would like to see Seven of Nine reunite with her former shipmates on Voyager. “Would I love to reunite with some of those characters? Sure, I think that’d be great,” Ryan told ComicBook.com. “[But] I don’t necessarily need to do a Voyager show again. I think that I’ve done that. But I’m not a writer. I can’t really tell you anything.”

“I’m having a great time on Picard,” continued Ryan, who is currently reprising her role as Seven of Nine on Star Trek: Picard. “It’s a very happy set. It’s a very relaxed set, which has been great. I didn’t have a phenomenal overall experience shooting Voyager. I don’t look back on that as a super fun four years for me, unfortunately, so to be revisiting this character in more pleasant work experience is great.”

While there’s no plan for a Star Trek: Voyager revival in the near future, a reunion between Seven of Nine and Picardo’s The Doctor may likely happen in Season 2 of Star Trek: Picard, as Picardo recently revealed that he’s been approached about reprising his role in the already-renewed sophomore run of the CBS All Access series.