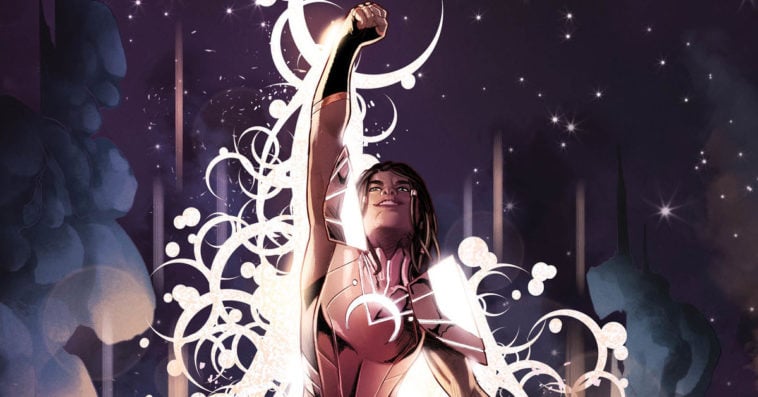 In Naomi #5, Naomi — a young adopted woman of color who lives in the small Oregon town of Port Oswego — visited her best friend, Annabelle, to share the first details she discovered about her true origin. Naomi told Annabelle that her adoptive father is actually a Rannian soldier, who alongside the Thanagarian refugee he was initially keeping track of, accidentally found her as a baby.

Naomi then revealed that the mysterious black box that had been with her since her arrival on Earth was able to meld with her body, giving her powers and a golden armor-like suit.

When Annabelle asked where Naomi actually came from, DC’s newly suited-up superhero gave a very millennial response. “So you know that thing on the Internet how there’s, like, a bunch of different universes? Different Earths?” explained Naomi without actually mentioning the name of her birth planet.

Naomi added that she heard a voice recording of her birth mother after merging with the box for the first time. According to Naomi, her mom told her that her home planet is similar to Earth, except that it had an excessive amount of radiation because of a hole in its ozone layer. This particular radiation granted 29 random people on the planet superpowers, including Zumbado who used his powers to carry out a mass murder that easily made him the ruler of the planet.

Since most people in Naomi’s home planet weren’t able to produce offspring, Naomi’s parents suspected that Zumbado would see them as a threat because of their ability to reproduce. So to ensure Naomi’s survival, they sent their friend Akira to take Naomi to safety, which led to her ending up on Earth.

The voice recording from Naomi’s mom ended with a request to use her superpowers for good. And just as Naomi started to wonder what to do with her newfound abilities, Zumbado arrived on Earth, telling her that she revealed herself on his radar the first time she melded with her mystery black box.

Naomi #5 is now out, while the next issue is set to hit the store shelves on June 19th.