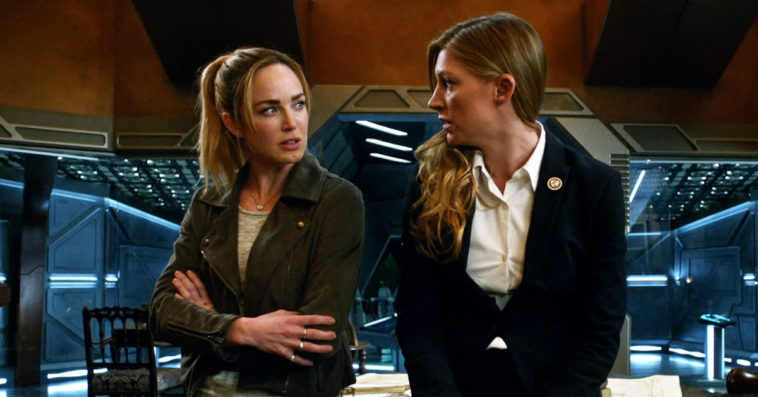 Sara Lance and Ava Sharpe are going to spend more time together in the upcoming Season 5 of DC’s Legends of Tomorrow.

In last month’s Entertainment Weekly profile of The CW’s Arrowverse, series star Caity Lotz and executive producers Phil Klemmer and Keto Shimizu revealed that Ava (Jes Macallan) will start living on the Waverider together with her girlfriend Sara (Lotz) and the rest of the Legends next season. While that’s definitely good news for all Avalance shippers, Lotz said that the lovers’ new setup isn’t going to be easy for her character.

“[It’s] going to prove to be very difficult for Sara,” Lotz teased. “It’s going to be hard for her to get any personal time, but also a good opportunity for growth in the Avalance relationship.”

Legends of Tomorrow: Ava Will Be Living on the Waverider in Season 5 https://t.co/SucxCMFDZE pic.twitter.com/YBD4aTk2xr

As viewers will remember, Ava was on bad terms with the Legends when she was first introduced in Season 3. Though Ava initially thought that the Legends were a threat to the timeline, she eventually came to appreciate their unorthodox methods and began working with them. Midway through Season 3, Ava became a romantic interest for Sara.

Since then, the pair have endured everything together from Ava learning she’s a clone to both of them confronting their insecurities in an IKEA-like purgatory in Season 4. But with the shutdown of the Time Bureau following the Legends’ successful effort to help humanity have a positive outlook on magical creatures in the Season 4 finale, Ava is left in a new predicament.

“She’s like a showrunner who enters hiatus and it’s just like, ‘Ahh, I don’t know what to do by myself,’ and that’s scary,” Klemmer said of what Ava will be dealing with at the start of the new season.

Shimizu added: “Part of her character is figuring out how she fits on the Waverider. We have some great stories with her, and we’ll continue to watch her evolution. She’s a character we love so much.”

Outside of the Avalance pairing, Shimizu said that he’s excited to explore how Ava “becomes ingrained in this family structure, not just through Sara but through her friendships with all of the other characters. She’s this great, complicated person that everyone can have their own friendship with on the ship.”