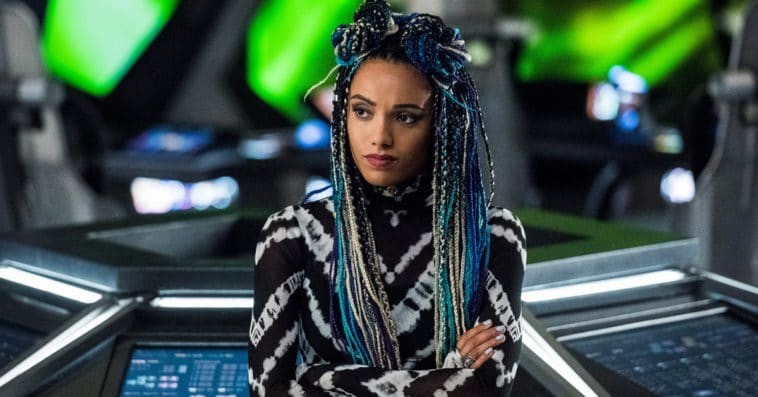 Maisie Richardson-Sellers as Charlie in DC's Legends of Tomorrow

While most of the main cast members of DC’s Legends of Tomorrow returned for its sixth and seventh seasons, one of the few stars that didn’t come back for the show’s final two seasons is Maisie Richardson-Sellers.

The English actress’ departure from the CW series was announced by showrunner Phil Klemmer after the season 5 finale aired in June 2020. “This was something that was well over a year in the works,” Klemmer told TVLine of the actress’ exit from the show. “We knew that [Maisie] was wanting to make her mark as a filmmaker on her own, and so that allowed us to craft a story that would, hopefully, make for a satisfying conclusion. The [season 5] finale was sort of all about her.”

Why did Charlie leave the Legends?

After saving the world from her sister Lachesis’ (Sarah Strange) control at the end of the season 5 finale, Charlie (Maisie Richardson-Seller), a.k.a. Clotho, bid farewell to the rest of the Waverider crew and decided to stay behind in 1970s London with her punk band The Smell.

“For me, it’s so bittersweet, bringing it back to that punk club and The Smell,” Klemmer said of how Charlie’s story ended. “The good thing is that people are allowed to come back and have come back.”

Richardson-Sellers made her Legends of Tomorrow debut as Amaya Jiwe, a.k.a. Vixen, in season 2. In season 4, the actress began taking on the role of Charlie, who was revealed to be the Greek goddess Clotho early in season 5.

Richardson-Sellers confirmed her departure from the series in a since-deleted tweet that read: “Thank you for your endless love and support. Amaya and Charlie have brought me so much joy these past 4 years, and you are THE MOST kind, generous, inclusive fan base a show could hope for. Never change. I can’t wait to share the projects I’m currently creating. Love you all.”

Who is Maisie Richardson-Sellers?

Maisie Richardson-Sellers is an English actress who made her big-screen debut as Korr Sella in 2015’s Star Wars: Episode VII – The Force Awakens. Prior to appearing in Legends of Tomorrow, she starred as Michal in the short-lived ABC series Of Kings and Prophets. She also played the recurring role of Rebekah Mikaelson / Eva Sinclair on The CW’s The Originals.

Who plays Amaya in Legends of Tomorrow?

Amaya Jiwe, aka Vixen, is one of the two characters Richardson-Sellers played in Legends of Tomorrow. Amaya first appeared in season 2, aligning herself with the Legends to get their assistance in her mission to hunt down the mysterious time traveler who killed her boyfriend, Rex Tyler (Patrick J. Adams). Amaya decided to leave the Legends and return to her village at her proper point in time after they defeated Mallus at the end of season 3.

After portraying Amaya, Richardson-Sellers came back for seasons 4 and 5 to play the role of Charlie, a singer for the punk rock band The Smell, who was later revealed to be the Greek goddess Clotho. After saving the world from her twisted sister Lachesis (Sarah Strange) at the end of the season 5 finale, Charlie bid farewell to the rest of the Waverider crew and decided to stay behind in 1970s London to continue her punk band dream.

What is Maisie Richardson-Sellers doing since leaving Legends?

Since her Legends of Tomorrow exit, Maisie Richardson-Sellers has been busy working on directing and acting projects.

Richardson-Sellers made her directorial debut in the drama short film Sunday’s Child. Released in 2021, Sunday’s Child centered on Esi (Chauntice Green), a new Los Angeles resident who stumbles upon a diverse, vivid party that welcomes her into a community where she can let go of societal and family pressures and venture towards self-acceptance.

Although Richardson-Sellers had not come back in front of the camera since her departure from Legends of Tomorrow, she actually returned to the CW series as a director. She directed the show’s season 6 episode There Will Be Brood and the season 7 episode The Fixed Point.

Richardson-Sellers didn’t retire from acting after leaving Legends of Tomorrow. In fact, since exiting the show, the actress has appeared as Chloe Winthrop in the 2020 Netflix movie The Kissing Booth 2 and in its 2021 sequel The Kissing Booth 3.

Richardson-Sellers also played the starring role of Kathy Freeman in the thriller miniseries The Undeclared War. Written and directed by Peter Kosminsky, the six-part series revolves around a New British general election and follows a crack team of data analysts trying to fight back a possible cyber-attack on the United Kingdom’s electrical system. The series originally aired on Channel 4 in the UK from June to August of 2022 and is currently available to stream on Peacock in the United States.

According to her IMDb page, Richardson-Sellers will be next seen in the drama project Run, directed by Bernard Kordieh, and in an untitled thriller project helmed by Kelley Kali.

How old is Maisie Richardson-Sellers?

Maisie Richardson-Sellers is currently 30 years old. She was born on March 2nd, 1992.

Where did Maisie Richardson-Sellers go to college?

Maisie Richardson-Sellers attended private schools through bursaries and scholarships. In 2013, Richardson-Sellers graduated with a degree in Archaeology and Anthropology from Hertford College, University of Oxford. According to reports, she participated in and directed several plays, including Mephisto, Chatroom, and There Will Be Red, while in college.

Born and raised in London, Maisie Richardson-Sellers is multi-ethnic. Her mother is Black Guyanese while her father is White British.

Who are Maisie Richardson-Sellers’ parents?

Maisie Richardson-Sellers’ mother is Joy Richardson while the name of her English father is not known to the public.

Both of her parents are actors. Her mom starred in a number of British TV shows including The Bill, Holby City, Doctors, Casualty, and Silent Witness. She even appeared alongside Richardson-Sellers in two episodes of Legends of Tomorrow, appearing as Amaya’s ancestor. On the movie front, Joy had a role in the 2006 Oscar-nominated film Children of Men, which starred Clive Owen, Julianne Moore, and Michael Caine, among many others.

Is Maisie Richardson-Sellers in a relationship?

Maisie Richardson-Sellers, who openly identifies as queer, is in a relationship with L.A. soul singer Clay. The two have been dating for a few years now after meeting at a party.

“She’s the best! I am honestly inspired by her every single day and feel so grateful to have her in my life,” Clay gushed about Richardson-Sellers in a 2019 interview with Ones To Watch. “We met at a party that neither of us particularly wanted to be at. It’s always the case, I suppose, to encounter something [or] someone amazing when you’re least expecting it.”

Richardson-Sellers directed and edited the visual of Clay’s 2019 Project 5 video, which spotlights the LGBTQ+ community. “We noticed that we were constantly brainstorming and bouncing ideas off of each other, and decided to explore that dynamic on a project,” Richardson-Sellers told Diva Magazine about how the video was conceived. “This one was the perfect place to start! It’s been fantastic, especially because we know each other so well that there is an effortless flow and trust. We have several more collaborations in the works, so watch this space.”

Watch Project 5 in the video below: