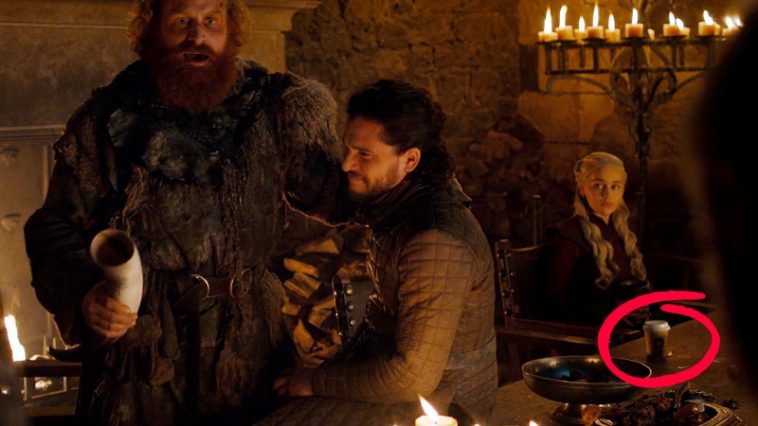 After previously blaming Emilia Clarke for the infamous Game of Thrones coffee cup fiasco, Sophie Turner is now accusing Kit Harington of being responsible for the much-talked-about production gaffe.

During Turner’s recent appearance on the TBS late-night talk show Conan, host Conan O’Brien gave her an opportunity to defend herself from fans who have been blaming her for the snafu. “The coffee cup was where Kit’s chair was. First I blamed it on Emilia, but I don’t think Emilia would do that,” said Turner, who played Sansa Stark on the HBO series.

“Kit is lazy and I think he would have done that,” continued Turner. “It was in front of Kit’s chair and then obviously he moved and this picture was taken and it looked like it was in my seat, but I wasn’t there either. It was Kit. It was a hundred percent Kit.”

In an attempt to make Turner’s alibi stronger, O’Brien mentioned that the actress didn’t actually drink a lot of liquids on the set of the series. “Yeah, [that’s because] I wore a corset,” explained Turner. “[And if I drink a lot of liquids], I either piss myself or I throw up. So I am not really taking anything in.”

According to Turner, Clarke, who played Daenerys on the series, also wore a corset. And since Harington didn’t wear a corset or any similar piece of clothing on the show, Turner is a “hundred percent” sure that the Jon Snow actor was the one responsible for the coffee cup snafu.

On May 5th, Game of Thrones left some viewers shocked and confused at the same time when they spotted a modern-day coffee cup during a large banquet scene in the fourth episode of the show’s final season.

Shortly after the mix-up went viral, HBO released a statement confirming that the coffee cup was indeed from the show’s craft services. Instead of making a big deal out of the fiasco, the network just made fun of it, saying, “The latte that appeared in the episode was a mistake. Daenerys  had ordered a herbal tea.”

A day after the episode premiered, HBO edited the coffee cup out of the shot it appears.