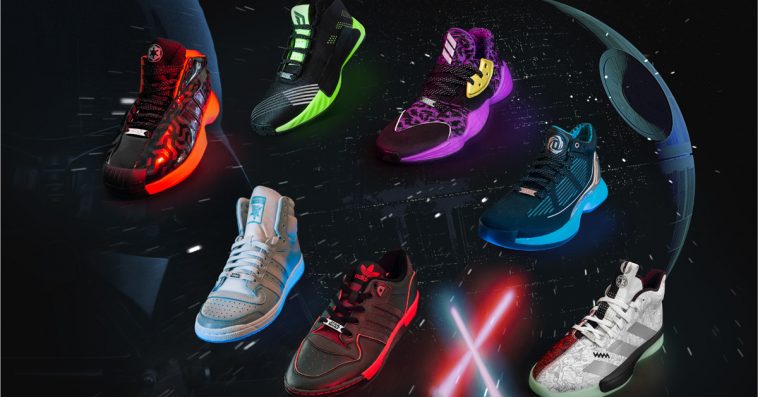 Adidas and Lucasfilm have teamed up once again for a new footwear and clothing collection based on the Star Wars franchise.

This year’s Star Wars capsule collection will be released in three packs across adidas Basketball, Running, and Originals. Each pack celebrates a Star Wars element, including lightsabers, starships, and iconic Star Wars characters.

The collection is set to debut on November 1st with the Lightsaber-themed pack, followed by the Space Battle pack and the Characters pack launching on November 21st and November 29th, respectively.

Unveiled earlier this week, the Lightsaber-themed pack boasts an overarching design inspired by the unbreakable bond between a Jedi and their lightsaber. The pack’s most notable attribute is the kyber crystal-themed elements featured on each of the sneaker’s UV midsole, which mimic a lightsaber’s glow.

The Lightsaber-themed pack includes Harden Vol. 4 sneakers with purple accents that pay homage to Mace Windu; Dame 5 shoes inspired by Luke Skywalker’s green lightsaber; Top Ten kicks based on the legendary Obi-Wan Kenobi; and Crazy 1 and Rivalry Lo sneakers whose designs are inspired by Darth Vader and the Dark Side as a whole.

With a price range of $40 to $140, the Lightsaber-themed pack will be available at adidas.com and select adidas stores starting November 1st at 10 a.m. ET.