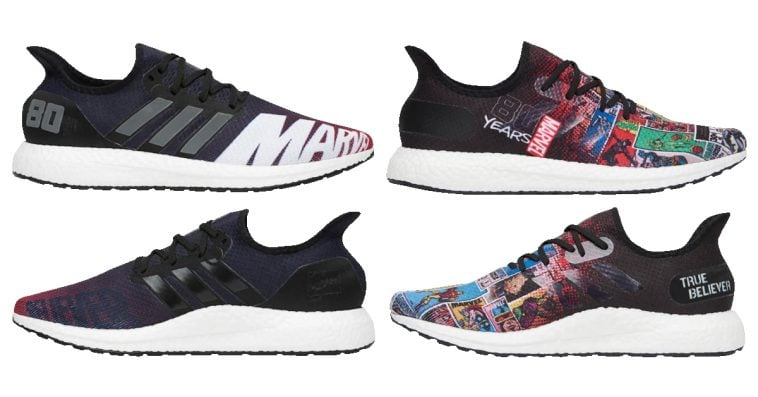 The two special editions of adidas AM4 sneakers created to commemorate Marvel’s 80th anniversary are now available to the public.

First announced at New York Comic Con earlier this month, these sneakers are a collaboration between adidas Speedfactory, Marvel, and footwear retailer Foot Locker. Officially called AM4 Marvel 80 Vol. 1 and AM4 Marvel 80 Vol. 2, both shoes are designed by Marvel legend Joe Quesada.

“Some of the true joys of my career at Marvel are all the unique opportunities that have come my way, things that I could never have anticipated being a part of like creating two different, exclusive sneaker designs for adidas and Foot Locker celebrating Marvel’s 80th anniversary. I had such a blast designing them and I hope Marvel and adidas fans have as much fun wearing them,” said Quesada in a statement, who is now the EVP and creative director for Marvel Entertainment.

The AM4 Marvel 80 Vol. 1 features a large Marvel logo that seamlessly blends into the iconic adidas Three Stripes. The shoes also have a simple “80” graphic printed near the heel that pays homage to Marvel’s anniversary.

The AM4 Marvel 80 Vol. 2, meanwhile, honors Marvel Comics with a colorway featuring corner boxes that give little glimpses at comic book characters and their respective stories. The sneakers also have an “80 Years” graphic on the quarter panel that celebrates the momentous anniversary.

Available in men’s and boys’ sizes for $150 a pair, both limited-edition sneakers are now on sale at Foot Locker’s 34th St. Herald Square location in New York and at Foot Locker’s online store.

READ  Dr. Martens boots get a cute makeover from Hello Kitty and Friends