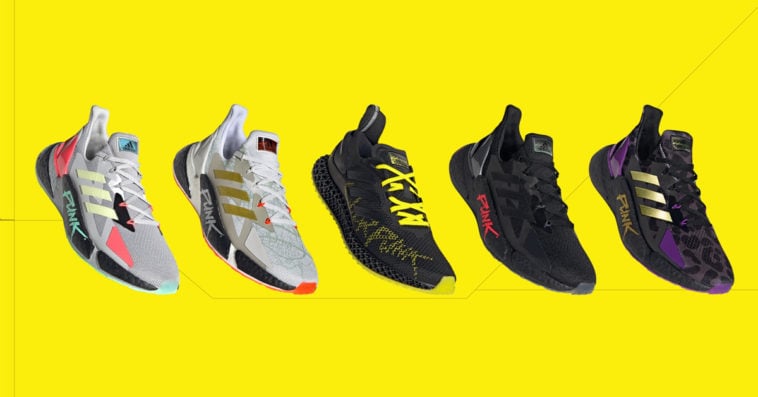 The highly anticipated release of Cyberpunk 2077 is just a month away, so collaborations promoting the video game have started to roll out. One of the exciting collabs is a shoe line from Adidas and CD Projekt Red, which is the developer and publisher of the video game.

Officially revealed last week, the collection is comprised of X9000L4 and X90004D sneakers that incorporate the typeface and color schemes seen in the teasers for Cyberpunk 2077. The X90004D features a black Primeknit upper with yellow “CYBERPUNK” logo, laces, and heel counter lettering.

The X9000L4, meanwhile, comes in four different colors: gray, black, white, and a leopard pattern. Each of these silhouettes has its own flashy accents ranging from turquoise, red, gold, purple, and silver.

Reactions to the shoe line are mixed. While some sneakerheads think the designs of the shoes capture the cool grit of Night City (the setting of the video game), others find them unappealing. Apparently, the pricing is also an issue for some fans. “For $200 I’d never wear them,” commented one Twitter user on a tweet by Hypebeast about the collection.

The shoe line doesn’t have an official release date yet, but many are expecting a November 11th launch with prices ranging from $190 to $250. Unfortunately for some fans, CD Projekt RED business relations director Rafal Jaki revealed that the sneakers will not be available worldwide.

“As I’m getting a lot of questions about this – the Adidas X Cyberpunk 2077 Collab is available in selected Asian markets only. As a partner we don’t make the distribution decisions as that is Adidas core competence,” Jaki wrote tweeted, along with some pictures of the sneakers and characters from the video game.

As I’m getting a lot of questions about this – the Adidas X Cyberpunk 2077 Collab is available in selected Asian markets only. As a partner we don’t make the distribution decisions as that is Adidas core competence. pic.twitter.com/hklVRwey5S

Cyberpunk 2077 is scheduled to be released for Microsoft Windows, PlayStation 4, PlayStation 5, Stadia, Xbox One, and Xbox Series X/S on December 10th.

READ  Adidas will soon only use recycled plastic in their products