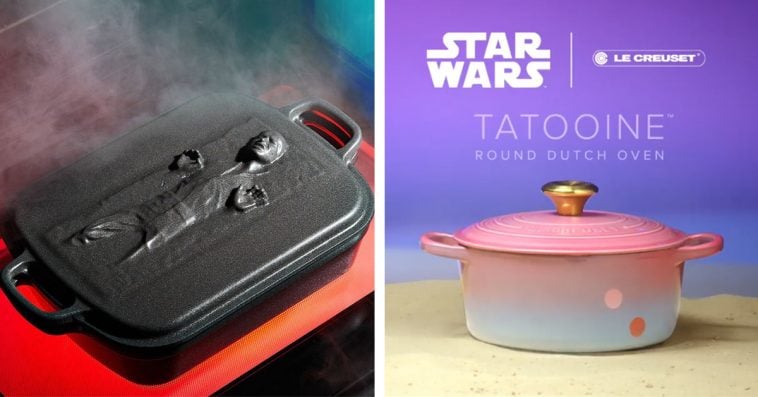 Star Wars fans can soon turn their kitchen into an extension of the galaxy far, far away with the upcoming release of Le Creuset’s cookware collection based on the iconic characters, starships, and space stations from the hit epic space opera franchise.

Announced during the Triple Force Friday last week, the limited-edition nine-piece product line from the premiere French cookware maker includes the Han Solo Carbonite Signature Roaster, which recreates one of Harrison Ford’s infamous scenes from the Star Wars: The Empire Strikes Back on the lid. The only Le Creuset roaster featuring a lid, the cookware will retail for $450.

Meanwhile, for a slightly cheaper price of $395, fans of the Dark Side can get the Darth Vader Round Dutch Oven, which features the character’s iconic mask on the lid.

For budget-conscious fans, the collection offers Mini Cocotte pots in the likeness of R2-D2, C-3PO, and BB-8 for only $30 each. There’s also the $25 Porg Pie Bird and the $20 silicone trivets in the shape of the Millennium Falcon and the Death Star.

But the centerpiece of the collection is the hand-painted, special-edition $900 Tatooine Round Dutch Oven, whose design is inspired by the desert planet with captivating binary sunsets. In celebration of the upcoming ninth installment of film series, only nine Tatooine Round Dutch Ovens will be available worldwide, making it a true collector’s item.

The cookware collection will be available online and in Le Creuset stores starting November 1st, while Star Wars: The Rise of Skywalker will hit theaters on December 20th.