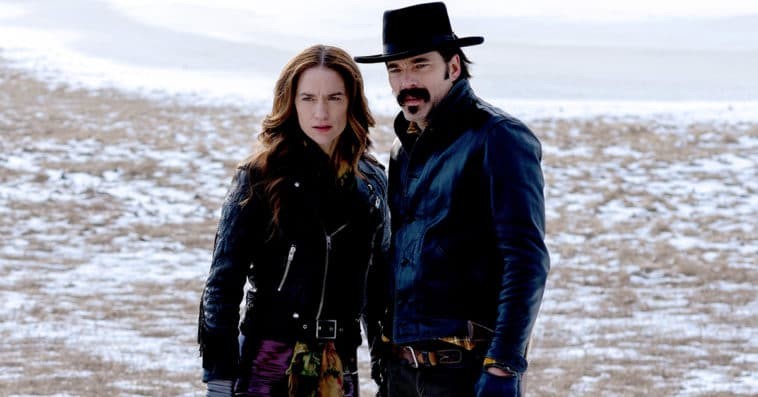 Wynonna Earp is ending this spring.

Syfy announced on Friday that the back half of Wynonna Earp season 4 will serve as the show’s final batch of episodes. Those six episodes will start airing on March 5th, with the series finale arriving on April 9th.

In a statement, showrunner and executive producer Emily Andras expressed her gratitude to all the people who have worked on the series. “I’d like to thank our wonderful cast and crew, all of whom were instrumental in bringing Wynonna Earp to our loyal and passionate audience,” said Andras. “We couldn’t be prouder of these last six episodes on Syfy, and are thrilled to share them with our beloved fans, who have changed our lives forever. I have been honored to tell Wynonna and her family’s story, and along with Seven24, Cineflix and CTV Sci-Fi, are hopeful we can continue to share their inspiring tales in the future.”

Following the cancellation news, series main cast members Melanie Scrofano (Wynonna Earp), Tim Rozon (Doc Holliday), Dominique Provost-Chalkley (Waverly Earp), and Katherine Barrell (Nicole Haught), all took to social media to thank the fans (aka Earpers) who have supported the show since it launched in 2016. They also reflected on their four-year journey on the show and even teased the upcoming second half of Wynonna Earp season 4.

I’m really proud of what we’ve accomplished over these four seasons and so excited to get to watch the second half of season 4 together. There will be tears but there will also be laughs. And crop tops. And family ❤️

I'm so incredibly grateful for the opportunity to play the best damn Cowboy with the best damn cast & crew for the best damn fans ever. So much love. Thank you. I will never ask you to fight because you’ve already fought for so much already but I know you will anyway. ❤️ #E4L

I am SO damn PROUD of this show, this community, this family and the life-changing journey that has been 4 beautiful seasons of Wynonna Earp. We cannot wait to share the rest of season 4 with you!!! It’s filled with pure, top shelf magic ❤️ #E4L https://t.co/ebjbqi5tRE

Though the reason for the show’s cancellation was not revealed, the supernatural drama’s long-term future has been up in the air ever since production on season 4 was delayed due to financial challenges on the part of its producer IDW Entertainment. During that production limbo, Earpers rallied behind the show on social media and even purchased several billboard spaces in Time Square to show their love and support for the series. Ultimately, Cineflix Studios came aboard to co-produce season 4 and filming started shortly thereafter.

But in March 2020, production on Wynonna Earp season 4 had been delayed once again after the COVID-19 pandemic hit. Filming for the remaining episodes resumed in July right as the first half of the season debuted on Syfy.

The series has also seen a drop in viewership since it returned on-air following its hiatus. The first half of Wynonna Earp season 4 only averaged 320,000 total viewers, while its season 3 had an average of 472,000 total viewers.