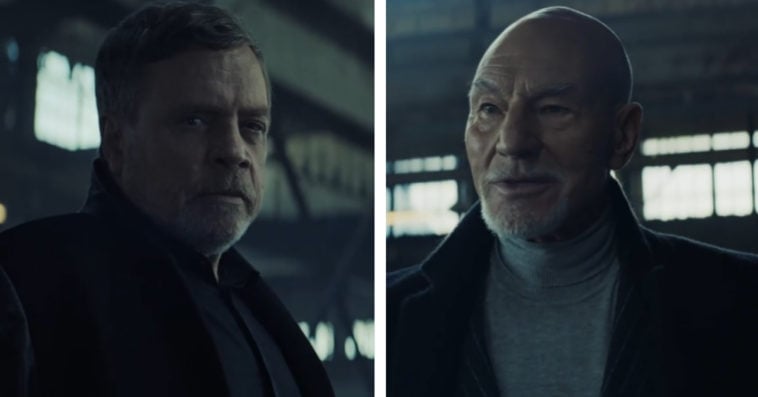 Mark Hamill’s Luke Skywalker and Patrick Stewart’s Jean-Luc Picard are two of the most popular heroes in the sci-fi genre, and fans have wondered for years what it would be like if the two characters had crossed paths. While a crossover between Star Wars and Star Trek would likely never happen, fans would be thrilled to know that Hamill and Stewart have recently been brought together for a series of commercials for delivery service Uber Eats.

The first ad in the series sees the pair coming face to face with each other in a seemingly abandoned warehouse. American actor Hamill holds a baseball bat while British thespian Stewart wields a cricket bat. The visuals suggest that things are going to get physical between the two, but funnily enough, the meeting just ends up with a rather petty confrontation over the right pronunciation of tomatoes.

Stewart replies: “Tonight, I’ll be eating four-cheese tortellini with extra tomatoes (tuh·maa·tow),” emphasizing the elongated “a” in his British accent.

In addition to the clip above, there are two other videos in the advert series: one that shows Stewart winning a game of air hockey against Hamill, and the other one showing Hamill beating Stewart in a game of Connect Four.

In a tweet, Stewart wrote that he’s “honored to have battled it out with Mark Hamill to settle one of the greatest debate of all time.”

Stewart made his first appearance as Picard in the debut episode of Star Trek: The Next Generation in 1987. After the series ended its seven-season run in 1994, Stewart reprised his role in feature films Star Trek Generations (1994), Star Trek: First Contact (1996), Star Trek: Insurrection (1998), and Star Trek: Nemesis (2002). Earlier this year, Stewart brought Picard back to the small screen in the CBS All Access series Star Trek: Picard, which will start filming its season 2 next year.

Hamill, meanwhile, made his debut appearance as Luke in Star Wars: Episode IV – A New Hope in 1977, and went on to star in two follow-up movies: The Empire Strikes Back (1980) and Return of the Jedi (1983). Three decades later, Hamill returned for the Star Wars sequel trilogy, reprising his role in all three films: The Force Awakens (2015), The Last Jedi (2017), and The Rise of Skywalker (2019).