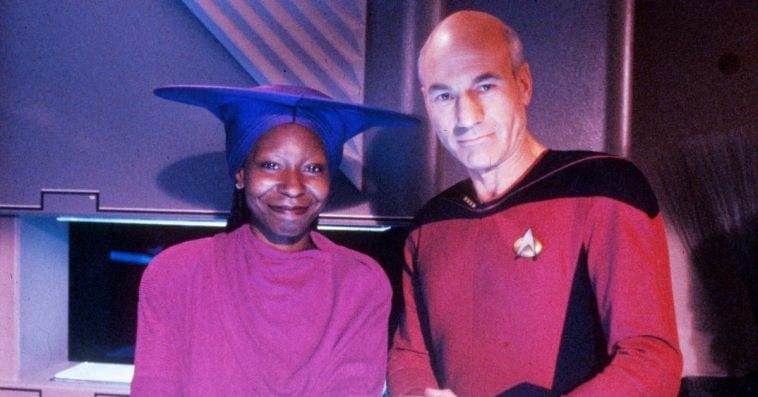 Jean-Luc Picard will be reunited with his favorite bartender Guinan in Season 2 of Star Trek: Picard.

During an appearance on Wednesday’s episode of The View, Patrick Stewart — who is reprising his iconic role of Picard in Star Trek: Picard — surprised the talk show’s moderator, Whoopi Goldberg, with a “formal invitation” to join the cast of the new Trek series for its sophomore run.

“I’m here with a formal invitation, and it’s for you, Whoopi,” Stewart said. “Alex Kurtzman, who is the senior executive producer of Star Trek: Picard, and all his colleagues, of which I am one, want to invite you into the second season.”

Stewart’s offer elicited applause and cheers from the studio audience as Goldberg giggled in disbelief. Still shocked by what she just heard, Goldberg stood up from her seat and gave Stewart a big hug. And when the actor begged her to “please say yes,” Goldberg did so with a smile.

As longtime Trek fans know, Goldberg played Guinan, an El-Aurian bar hostess aboard the USS Enterprise, across 28 episodes of Star Trek: The Next Generation between 1988 and 1993. Alongside Stewart’s Picard, Goldberg’s character also appeared in the movies Star Trek: Generations and Star Trek: Nemesis.

Both former co-stars were clearly very happy to be working together again. “I’ve said this on the show before, but Star Trek was one of the great experiences, from the beginning to the end,” said Goldberg, as she started to get emotional. “I had the best, best, best time. Best time ever.”

READ  Has Altered Carbon been cancelled or renewed for season 3?

“Well, it was wonderful having you and we cannot wait to have you with us again one more time,” Stewart replied.

Though Goldberg is officially appearing in Star Trek: Picard, it has yet to be announced whether she’s going to be a series regular in the next season or will simply be a recurring cast member just like in Star Trek: The Next Generation. In any case, fans are definitely excited to find out what Guinan has been up to since her last Trek appearance.

Season 1 of Star Trek: Picard premieres on Thursday on CBS All Access.