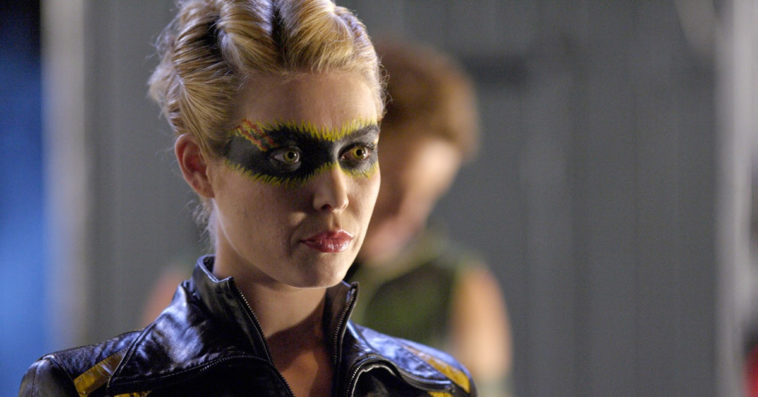 Alaina Huffman is joining the cast of The CW’s The 100 for its seventh and final season.

The Canadian actress will recur as a new character named Nikki in the last 16-episode season of the post-apocalyptic sci-fi drama. Though it’s unclear how many episodes Huffman will appear in, the official description of her character suggests that she will be playing a significant role when the series returns.

“One of the newly-awakened Eligius IV convicts, Nikki is a bank robber and spree-killer who is both unpredictable and fierce. She will take on an unexpected leadership role, advocating for her people in the complicated new world of Sanctum,” reads the character description.

Shortly after her casting was announced, Huffman took to Instagram to reveal how excited she is for the viewers to meet Nikki. The 39-year-old actress also thanked the whole cast and crew of The 100 for welcoming her into their family.

Ayeee can’t wait for y’all to meet Nikki! I’m definitely falling for her! ❤️ Thank you @cw_the100 @rothenberg.jason and the whole #The100 family for being so welcoming! LetsGo

Huffman’s first big break was in the 2007 Syfy series Painkiller Jane, in which she played Maureen Bowers, a former DEA partner and the best friend of the titular character. She then landed the role of Dinah Lance, aka Black Canary, on The CW’s Smallville, where he appeared for a total of six episodes between 2008 and 2011. After that recurring stint, Huffman became a series regular on Syfy’s Stargate Universe, in which she played Tamara Johansen for two seasons from 2009 to 2011. She also took on the role of the supervillain Abaddon on The CW’s Supernatural.

On the movie front, Huffman starred alongside Alison Williams and Logan Browning on the Miramax’s psychological thriller The Perfection.