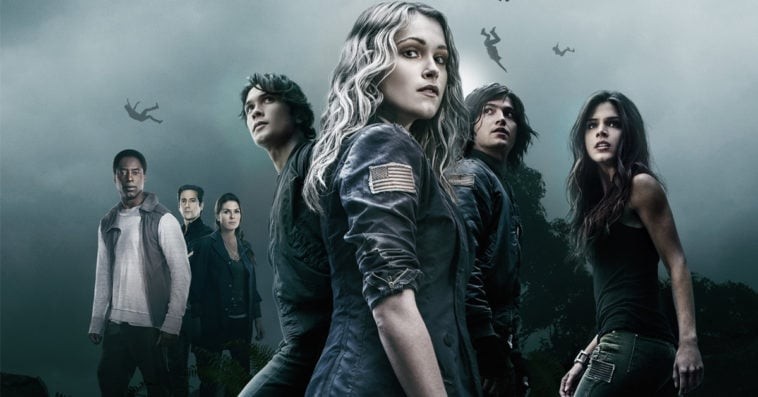 The 100 is ending its seven-season run later this month, so to look back at the series’ crazy journey since it launched on The CW in 2014, here are some of the show’s biggest behind-the-scenes scandals, dramas, and accidents that you probably didn’t know.

Talley recurred as Kyle Wick in season 2 of The 100. Though Kyle was introduced as a love interest for Lindsey Morgan’s Raven Reyes, a potential romantic relationship between the two didn’t really happen, as Talley was seemingly fired from the series. Series creator Jason Rothenberg initially said that Talley was not returning to the series because “he’s a busy actor,” but it appeared that Talley was axed from the show after he was exposed for making racist comments on his Twitter account, which included an apparent joke about his pseudo-KKK membership. The Twitter account in question was not a verified account, but multiple actors and writers from the show had tweeted at it during Talley’s stay with the series.

Morley, who played Bellamy Blake on the show, has been accused of abusive behavior by his former girlfriend, Arryn Zech. In a two-page statement she posted on Twitter last July, which has since been deleted, Zech claimed that the actor “emotionally and verbally abused” her.

Though Zech didn’t name the “girl” that caused their split, several news outlets identified her as Morley’s now-wife Eliza Taylor, who plays Clarke Griffin on The 100. Morley and Eliza, who got married just four months after his split with Zech, allegedly had an affair when she and Morley were still together. Zech claimed she caught them having an affair on surveillance cameras.

Clark was injured while shooting the pilot, while Avgeropoulos, who plays Octavia Blake on the series, almost got one of her eyes poke out with a spear while doing an action scene. Dichen Lachman also had her fair share of injuries, as the actress, who recurred as Anya in the first two seasons of the show, got her nose broken while filming season 2, episode 3, titled Reapercussions.

Morley broke his hand while filming season 3, episode 11, titled Nevermore. Morley was meant to hit a tree, which unfortunately took a bad turn for him. It was up for him how hard he should hit the tree, but he went all out and broke his hand.

Bob Morley suffered damage to his vocal cords after filming a scene at the end of season 1, in which his character was almost hanged by Richard Harmon’s John Murphy. This explains why his voice sounded a bit strained during his speech in the We Are Grounders – Part I episode.

#6 The 100’s Trigedasleng vs. Game of Thrones’ Valyrian

Though Richard and Jessica ― who recurs as Niyla on the show ― are siblings in real life, Richard revealed during a panel interview in 2018 that it can be very inconvenient for him to be with the same scene with Jessica. “We do have a lot of fun together as brother and sister but I wouldn’t be the same if we were both on set. I don’t work like that,” the actor said.

Raven was a completely different character before Morgan joined the show. In an interview, Morgan revealed that the original iteration of Raven was removed from the first episode of the series, only to be reconceived for the second episode. “Raven was supposed to be Finn’s (Thomas McDonell) mother. They took her out of the pilot because I think it was too long. They were like, ‘Oh, we don’t need this character,’” the actress shared. “And then they decided to bring her back as his girlfriend. If you read the pilot script, it’s still in there.”

Morgan was only supposed to appear in five episodes and was meant to be killed off in the first season. But because fans love her character so much, the producers changed their original plan for the character and promoted Morgan as a series regular.

Avgeropoulos has had a number of dramatic scenes on the show, but it seems that the most heartbreaking thing she experienced during her The 100 journey was leaving the show without giving a proper goodbye to the entire cast and crew.

“There are a lot of things I’m going to miss about the show, especially because I feel like we didn’t get to send each other off,” Avgeropoulos told Wonderland Magazine in May. “We finished filming The 100 the day before the worldwide lockdown, and it felt like I spent seven years of my life playing Octavia Blake in an artificial post-apocalypse universe to walking straight into what feels like a real-life apocalypse. I didn’t get to say goodbye properly to my castmates or thank the writers and producers that gave me this opportunity that completely changed my life.”

The 100’s penultimate episode and series finale are set to air on September 23rd and September 30th, respectively, at 8 p.m. ET on The CW.