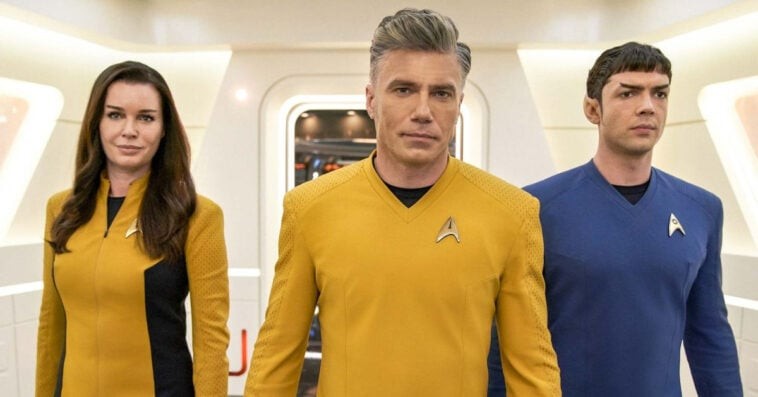 Star Trek Strange New Worlds is one of the most in-demand original streaming shows for the month of May.

Every month, tech company Parrot Analytics ranks all original streaming shows in the U.S. by how in-demand they are compared with the average TV shows in the country. The ranking measures audience demand, which reflects the desire for and engagement with, or overall popularity, of a series.

Strange New Worlds, which debuted on Paramount+ on May 5th, secured the fifth spot in the ranking, with an in-demand score of x30.9 the average show over the last month.

The four streaming series that beat out Strange New Worlds in the ranking are high-profile shows from different streamers.

At No. 4 is Disney+’s Moon Knight, which stars Oscar Isaac as the titular hero. Following the Marvel series at No. 3 is HBO Max’s critically acclaimed series Our Flag Means Death. And surprisingly, despite its latest season coming out in Disney+ back in 2020, The Mandalorian still managed to secure the second spot, just behind Netflix’s Stranger Things, which is the most in-demand original streaming show in the past month.

Stranger Things topping the ranking is a no-brainer, as the fan-favorite supernatural horror series finally returned to Netflix at the end of last month after a hiatus of nearly three years.

Completing the top 9 most in-demand streaming shows for May are Netflix’s Ozark (No. 6), Disney+’s WandaVision (No.7), Netflix’s Bridgerton (No. 8), and Paramount+’s Star Trek: Picard (No.9).

In addition to the abovementioned trio, Strange New Worlds also stars franchise newcomers who play updated versions of some of the classic 1960s Star Trek characters. These include Babs Olusanmokun as Dr. M’Benga, Jess Bush as Nurse Christine Chapel, and Celia Rose Gooding as Nyota Uhura.

The 10-episode season 1 of Strange New Worlds will wrap up on July 7th. A second season had already been ordered last January.

Compared to current Star Trek shows like Star Trek: Discovery and Star Trek: Picard, Strange New World is more episodic and features close-ended stories every week. It, however, still has an aspect of serialization, thanks to at least one plot point that will be sprinkled in across episodes.

The series is streaming exclusively on Paramount+ in the U.S., with new episodes arriving on the streaming service every Thursday at 3 a.m. ET.