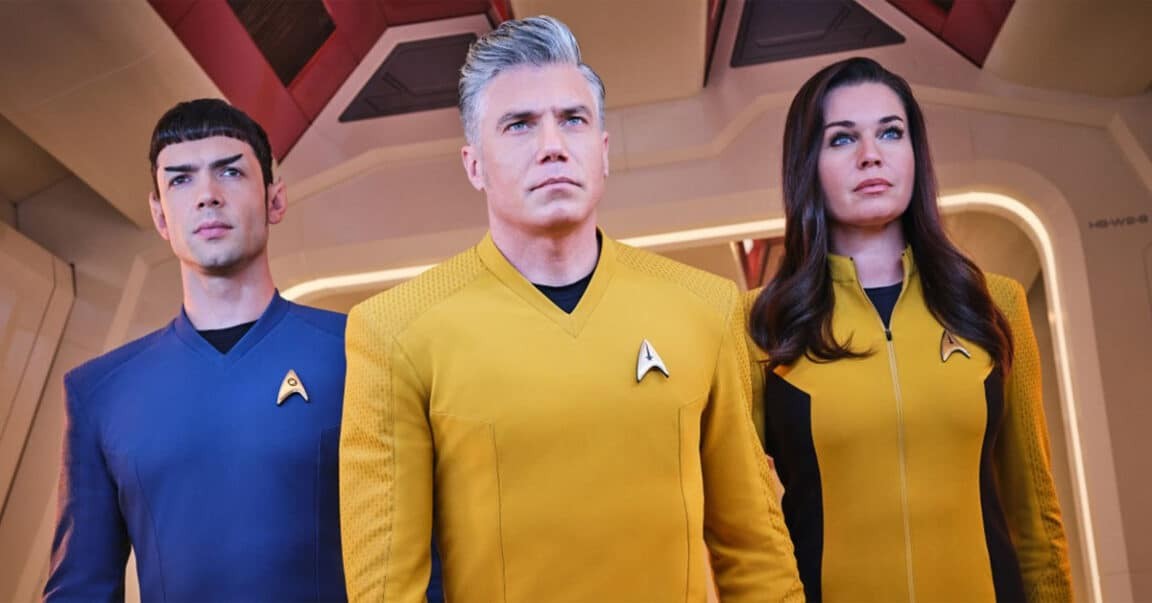 Star Trek Strange New Worlds is the latest addition to the ever-expanding Star Trek universe on Paramount+. The show had already made its debut last month, but if you’re one of those who haven’t seen it yet, here’s everything you need to know about the series.

The first episode of Star Trek Strange New Worlds debuted on Paramount+ on May 5th, 2022.

Aside from being a prequel to Star Trek The Original Series, Star Trek Strange New Worlds is also a spinoff of Star Trek Discovery. The new show’s three main characters mentioned above all appeared in season 2 of the Sonequa Martin-Green-led series.

After the sophomore run of Star Trek Discovery ended in April 2019, fans began calling for Mount to reprise his role of Captain Pike in a spinoff set on the USS Enterprise, alongside Romijn as Number One and Peck as Spock. Fast-forward to January 2020, Star Trek universe boss Alex Kurtzman confirmed that such a show was already in development. Just four months later, Paramount+ picked up the spinoff to series, which was later named Star Trek Strange New Worlds.

Though Star Trek Strange New Worlds features a huge cast, the show is essentially a Captain Pike series. “We wanted to do a true prequel — PREQUEL — to the original series, and that is couched in the Pike years,” Mount told Cinema Blend in April when asked if there was anything he could say to ease the fears of fans who are worried about his series status going forward beyond season 1. The actor also suggested that a show without Pike as the captain of the Enterprise is not Star Trek Strange New Worlds but “a very different show.”

Star Trek Strange New Worlds is more episodic compared to newer Star Trek shows like Star Trek Discovery and Star Trek Picard. “[It will have] episodic value [with] characters stretched in a serialized quality,” series co-creator Akiva Goldsman said of the new series during a Star Trek panel back in September 2020.

Star Trek Strange New Worlds features close-ended stories that conclude every week. Writer and co-executive producer Akela Cooper described these as “more one-off plots.” Cooper, however, noted that there will be “one plot point” that they “will be sprinkling in” across the episodes, so there will still be an aspect of serialization in the show.

Aside from the abovementioned trio who all appeared in Star Trek Discovery season 2 in 2019, Star Trek Strange New Worlds also features performances from a number of franchise newcomers who play new versions of some of the classic 1960s Star Trek characters.

These include Babs Olusanmokun as Dr. M’Benga, Jess Bush as Nurse Christine Chapel, and Celia Rose Gooding as Nyota Uhura. It was also announced that Paul Wesley will be playing James T. Kirk in the already confirmed season 2 of the series.

Noonien-Singh is one of the early favorites among the new characters introduced in Star Trek Strange New Worlds. Noonien-Singh was assigned to the Enterprise as the acting first officer following Una’s disappearance in the first episode. She then became permanent chief of security after Una was rescued.

Noonien-Singh was born on December 8th, 2228 on Alpha I to Sa’an and Ronu Noonien-Singh. Noonien-Singh and her family, including her brother, Manu, were descendants of Khan Noonien-Singh, the Augment tyrant who once ruled a quarter of Earth’s population during the Eugenics Wars.

While she made herself something of an expert on Khan when she was a child, she also suffered bullying from other children due to her roots, being called names like “Augment” and “monster.”

As a child, Noonien-Singh lived aboard the colony ship SS Puget Sound, which was attacked by the Gorn. The population of the colony ship was captured and placed on a Gorn planetary nursery, where everyone except her was subsequently either eaten alive or had their bodies slit open and used as breeding sacks.

As the only survivor, Noonien-Singh was sent into space on a “raft” as part of a ritual. She was eventually rescued by the crew of the USS Martin Luther King Jr., including Una, who helped her recover from the tragedy, and inspired her to join Starfleet.

To get a glimpse of what the show is all about, you can check out the official trailer for the series below:

Star Trek Strange New Worlds is streaming exclusively on Paramount+ in the U.S., with new episodes arriving on the streaming service every Thursday at 3 a.m. ET.

A subscription is required to watch the series on Paramount+, which costs $5 per month for the Essential package or $10 for the Premium plan. New customers can also watch Star Trek Strange New Worlds for free on Paramount+ with the streamer’s seven-day trial.

Paramount+ is also available as an add-on to subscribers of Amazon Prime Video.

Other Star Trek series reportedly in the works include Star Trek Starfleet Academy and Ceti Alpha V. Sharing a name with the late 1990s video game, Star Trek Starfleet Academy is said to be set among the college of cadets mentored for leadership roles in the United Federation of Planets space force. Ceti Alpha V, meanwhile, is a limited series based on the character Khan Noonien-Singh and his The Wrath of Khan storyline.