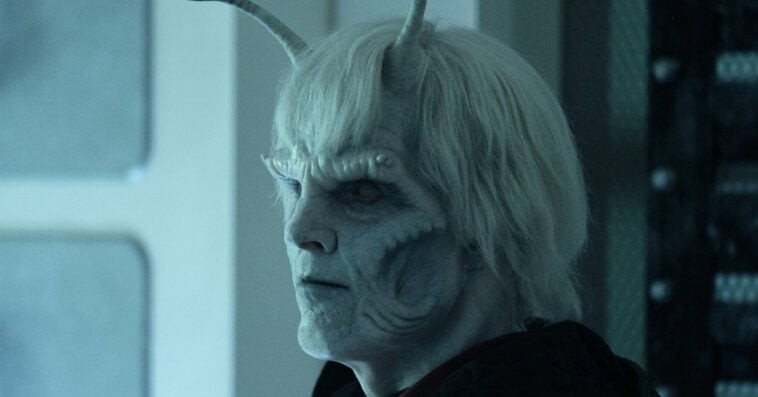 Bruce Horak left Star Trek: Strange New Worlds after his character was killed off in the penultimate episode of the show’s freshman run. But was the actor’s short stay in the sci-fi series part of the original plan?

Horak made his debut appearance as Hemmer in the first episode of the series, which premiered in May 2022 on Paramount+. Unfortunately for his fans, the actor left the show in June of the same year, right before its first season finale dropped on the streaming platform.

In a couple of interviews after his final episode was released, Horak shared that he departed the series simply because his character had already served his purpose. In fact, the actor knew even before he had been officially cast that Hemmer would not survive the show’s freshman run.

“I knew right off the bat,” Horak said of the longevity of his role in an interview with Inverse. “[Co-showrunner] Henry Alonso Myers told me [about it] in the Zoom audition before I even had my [prothestic] head mold made. He told me that I was gonna go.”

“They told me right off that they were setting Hemmer up to be the Obi-Wan Kenobi basically, to train Uhura, to give her that final piece of advice,” the actor recalled in a separate interview with Nerdist. “And that lesson — it’s the arc of her journey through the first season — is finding a home and connecting with the people on the Enterprise. And I knew that coming in, but I didn’t know how it was going to resolve. All I knew was that he was going to die. And I think my initial request was please make it cool.”

How did Hemmer die in Strange New Worlds?

Just like what Horak requested, Hemmer’s final moment was cool for many reasons. At the beginning of season 1, episode 9, titled All Those Who Wander, Hemmer saved Uhura when a Gorn hatchling attacked and spit venom that hit him instead of her.

The USS Enterprise crew initially believed that the Gorn’s venom will only blind or burn would-be victims, but they later found out that the venom will actually turn the victims’ bodies into a host for the Gorn, causing the deadly species’ babies to violently burst out of the host’s body.

Realizing what would happen if he didn’t take the matter into his own hands, Hemmer walked out into a frigid environment and ultimately stepped off a cliff to prevent the Gorn babies inside him from bursting out and killing everyone. Watch Hemmer’s final scene in the video below:

Why was Hemmer killed in Strange New Worlds?

In an interview with CinemaBlend, co-showrunner Henry Alonso Myers confirmed that the writers had decided from the very beginning to kill off Hemmer in the first season, noting that the death of the Enterprise’s Chief Engineer was one of the first creative risks they took to challenge the old Star Trek red shirt trope.

“You don’t want to look back at your season and say, ‘Phew, we didn’t take any risks, thank God!’ You want to look back and be like, ‘Boy, I hope these risks paid off,’ because I know as a viewer, I love it when they take risks. I love it when [shows] try different things,” explained Myers. “Hemmer’s death is a heartbreak, but, my God, it’s one of the best scenes we did all season. It’s a beautiful scene…it just makes me cry. The way that Bruce performs it, Celia performs it… it’s a really moving scene, and it does wonders for the Uhura character.”

The series executive producer continued: “A death like that has to matter. You want it to feel real. This is a universe where people die. It’s become a joke when a redshirt dies that it doesn’t mean anything. Part of our goal [in Strange New Worlds] was to remind the audience what it does mean when a redshirt dies. That it has some resonance, that there’s drama that comes out of it… the core of what we’re trying to do on Strange New Worlds is [to] tell character stories through genre.”

Have we seen the last of Bruce Horak in Star Trek?

While the story of Hemmer already ended in Strange New Worlds, Horak teased that fans might have not seen the last of him in the sci-fi franchise. “That’s the beauty of Star Trek,” Horak told Inverse. “There is that history where you can come back. And I can say this: The Star Trek career of Bruce Horak is not over. That much I can say. And it’s an absolute dream.”

What species is Hemmer on Strange New Worlds?

Hemmer is an Aenar, a subspecies of Andorians native to the Northern Wastes of Andoria. Like an Andorian, an Aenar has two antennae, but those of the Aenar have small indentations in the funnel-shaped tips. The Aenar don’t have skin or hair pigmentation, which explains their pale ice-blue/white appearance similar to albinos.

Though many, if not all, Aenar are completely blind, they have the ability to see via telepathy. In fact, the Aenar’s most distinctive characteristic is their highly evolved telepathic abilities. The Aenar can read minds and are able to psychically project themselves to other humanoids. They also use their telepathic skills to communicate amongst themselves as well as resist telepathy-based mind control to some degree. Any Aenar character also possess a limited form of precognition

In addition to Hemmer, other Aenar that have appeared in the Star Trek franchise include Gareb, Jhamel, Lissan, and Talla, who is half Aenar and half Andorian. Talla is the daughter of Aenar Jhamel and Andorian Shran. In Star Trek: Enterprise, Talla appeared to have fully functional eyesight, but it is unknown whether she inherited the Aenar senses, which are believed to be superior to those of most other humanoids.

The Aenar believe that death only came after one had fulfilled their life’s meaning.

But in an interview with Syfy Wire after the season-ender, Myers shut down that speculation, announcing that season 2 will introduce a new Star Trek character that will take over the recently vacated post.

“We will meet a new chief engineer — it’s not going to be Scotty,” Myers said. “There will be a new character who I’m excited for you to meet, but I’m not going to tell you who it is. It’s going to be a very different person, a completely different type of engineer.”

As mentioned above, Hemmer was played by actor Bruce Horak. The Canadian thespian developed retinoblastoma as a child, causing him to lose 91 percent of his eyesight.

Despite his condition, Bruce Horak’s career in acting has been remarkable. Since the 1990s, he has appeared in numerous theater productions in Canada, the United States, and other countries in Europe. He was part of the cast of Evil Dead – The Musical, which debuted in 2004, and has starred in his one-man show, Assassinating Thompson, since 2012.

In an interview with Thrillist, Horak shared that Hemmer’s blindness in Strange New Worlds was an important factor in selecting a suitable actor for the role. “When I first heard about him, I got really excited that the call was looking for a blind or visually impaired performer specifically to play a blind alien,” he said of his initial thoughts on the character. “The first thing I read, that I auditioned for, was the introduction of him with Uhura at the dinner party [in episode 2]. I loved it. I loved that it’s his first scene, and they get right into impairment and the idea of impairment and abilities, and the fact that he’s superior.”

Horak continued: “I read it, and I was like, ‘Oh my god, he’s Daredevil. He’s a superhero. He’s got these powers. And I want to do that. I want to be that guy.’ It’s aspirational. Even if it’s just on the screen, I want to be able to just catch a carrot that’s thrown at me without me even knowing it’s coming.

Aside from being an actor, Horak is also a painter. He had started painting as an experiment to see if he could depict his visual perception. And since 2012, he has created over a thousand of paintings, including around 600 individual portraits, which have become part of several art exhibitions in Vancouver and Toronto.

When will Star Trek Strange New Worlds season 2 come out?

Season 2 of Strange New Worlds doesn’t have an exact release date yet, but the 10-episode sophomore run is expected to premiere on Paramount+ in 2023.