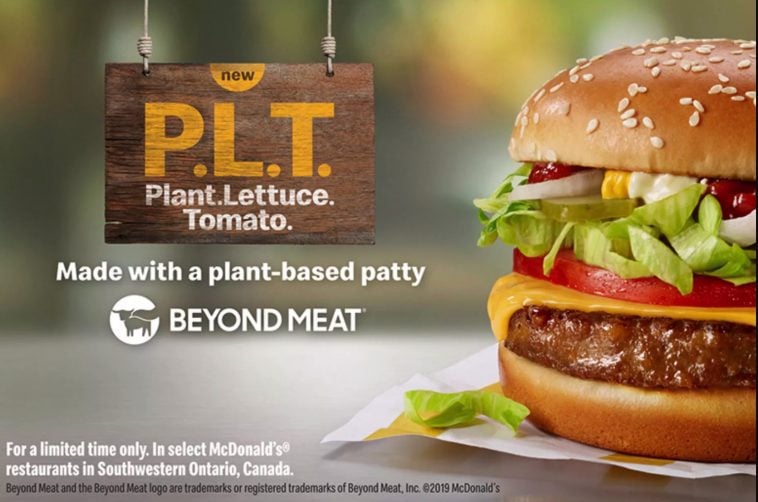 Plant-based burgers have become increasingly popular over the past couple of months, with Burger King, Carl’s Jr., and other fast-food chains unveiling a variety of plant-based menu items. Finally, McDonald’s is planning to join the foray with its new Plant Lettuce Tomato burger.

The company has announced that it will begin offering the “P.L.T.” from September 30th onward, but there is a caveat – the McDonald’s Plant Lettuce Tomato burger will only be available in 28 restaurants around Ontario.

The burgers are being created in partnership with Beyond Meat, who also partnered with Burger King for their Impossible Whopper. Beyond Meat also has an ongoing relationship with K.F.C. and a variety of other fast-food companies.

The unveiling in Canada is part of a test run to see how popular the Plant Lettuce Tomato burger might be. When Burger King first unveiled the Impossible Burger, it too spent several months testing it in select markets.

“We’ve been working on our recipe and now we’re ready to hear feedback from our customers.”

The P.L.T. burger will be priced at $6.49 CAD plus tax, which makes it slightly more expensive than a Big Mac, and it will be available starting September 30th.